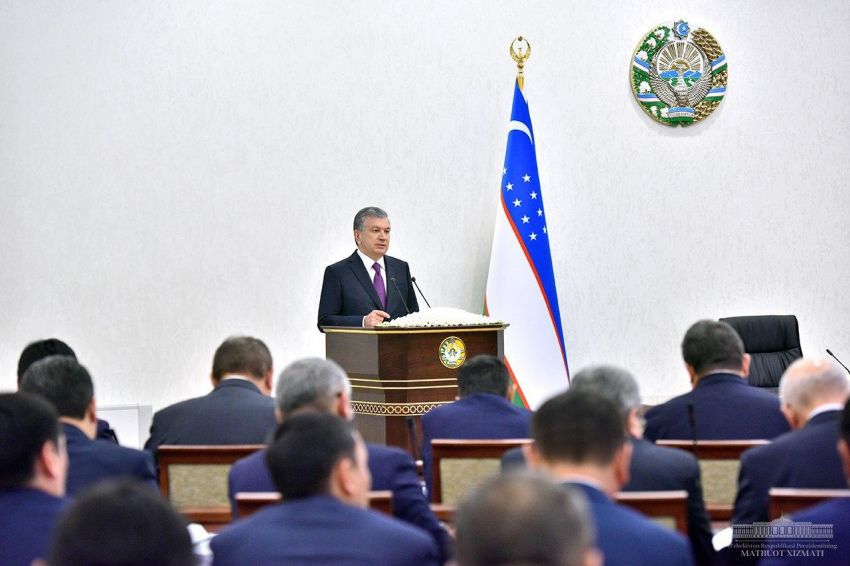 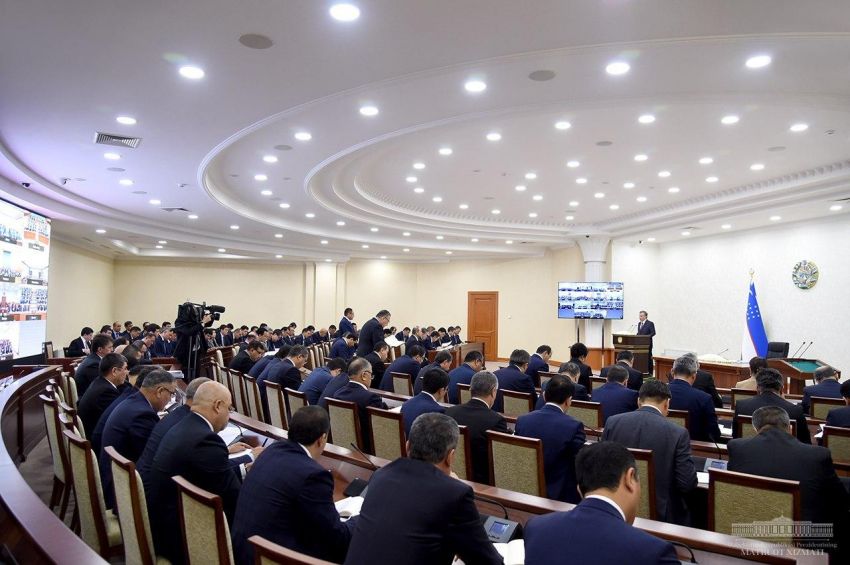 On January 15, President of the Republic of Uzbekistan Shavkat Mirziyoyev chaired a videoconference session to discuss issues related to the enhancement of exports, investments and localization.

Currently, amid intense competition in the global economy, principal factor in ensuring economic sustainability is believed to be the establishment and consolidation of positions in foreign markets.

Thanks to measures taken in Uzbekistan to support the sphere, the export performance of our country last year grew by 28 percent. The volume of regional industrial exports almost doubled.

In order to further the export volumes, a new system for determining and monitoring forecast indicators began to operate in Uzbekistan in 2020. Thus, the export forecast is approved for a three-year period. The plan for 2020 is defined at a level that exceeds last year’s indicators by 22 percent.

At the videoconference meeting, the challenges faced by government agencies and those responsible for exports, investments and localization were discussed. The President set personal responsibility of chiefs of the regions and industries for the effective use of each dollar drawn as investment.

The head of state noted that from now on it is not allowed to shift liability from the industry to the region and vice versa, while for the execution of the export forecast, each minister, head of the business association will be held accountable along with hokims.

The Ministry of Investment and Foreign Trade has been instructed to develop a roadmap to ensure the full implementation of the export forecast for the current year, specifically determining where and when products will be exported, what measures will be taken to do this.

The head of our state highlighted the need for effective use of potential in such leading industries as textiles, horticulture, leather and shoe production, construction materials, and the automotive industry.

The Uztukimachiliksanoat Association was recommended to bring cotton fiber processing capacities to 80 percent, diversify the range with new enterprises and expand the geography of exports.

The meeting participants examined in detail the exports of fruits and vegetables.

The Uzstandard agency was entrusted to introduce, together with hokimiyats, the international standard “Global G.A.P.” in 155 farming enterprises, and the State Plant Quarantine Committee to bring agricultural products in line with foreign market requirements.

Instructions were given on the arrangement of export and pre-export financing system to increase the attractiveness of export activities and expand the mechanism for compensating transportation costs.

The videoconference session served to deliberate on works towards supporting investments.

Almost 30 percent of investments disbursed last year from all sources were foreign direct. Investments began to come to remote areas with poor industrial development. 145 sectoral and 167 regional projects were implemented for a total of $ 5.4 billion.

Starting from this year, investment programs are being formed in accordance with a new system. For the year 2020, a list of 1,569 projects implemented through private and direct investment was approved. According to the program, this year it is intended to use 233 trillion 200 billion soums, including $ 7.1 billion of foreign direct investment and loans.

The meeting participants identified tasks for the leaders of industries and regions in the investment sphere.

The heads of relevant ministries, departments and economic associations are responsible for the timely launch of projects in corresponding sectors. For each project implemented in the administrative entities of the country with the participation of direct foreign investments, chiefs of government agencies of the national level will be held accountable.

Responsible officials were instructed to complete the pre-design work and the procedure of signing contracts with foreign investors, and take their execution under strict control.

Social and infrastructure projects designed for the current year at the expense of budget funds were also discussed at the meeting.

The President noted the need to establish tight oversight of the efficient spending of budget funds, the quality of construction and repair works at 2,190 facilities.

Instructions were given on the quality implementation of the projects launched last year, the completion of tenders for new facilities and funding issues.

The President pointed to the problems enduring in the development, implementation and monitoring of investment projects, in assessing the effectiveness of attracted investments.

The executives in charge were tasked with elaborating, with the assistance of foreign experts, investment strategies by industry and region, evaluating the expediency and economic efficiency of attracted investments, and identifying priority areas for direct foreign investment.

It was stressed that when placing investment projects, first of all, special attention should be paid to the possibilities of connecting to the infrastructure as well as to associated costs.

One of the pressing issues today is the production of goods competitive in the domestic and foreign markets by deepening the localization.

To this end, in excess of 800 projects were implemented in 2019. In particular, the production of polyvinyl chloride, wire rod, electric engines, glass containers, household appliances, medicines and other types of goods was launched.

Starting from this year, the localization program will be formed on the basis of new approaches, the head of state underscored.

In particular, within the framework of 830 projects, manufacturing of new types of products for 9 trillion soums is planned.

Shavkat Mirziyoyev noted the need for the execution of specific localization projects in the system of associations “Uzeltekhsanoat” (Uzbekistan Electric Technologies Industry), “Uzsanoatkurilishmateriallari” (Uzbekistan Industrial Construction Materials), joint-stock companies “Uzagrotekhsanoat-holding” (Uzbekistan Agricultural Machines Industry), “Uzavtosanoat” (Uzbekistan Automotive Industry), the Agency for the Development of the Pharmaceutical Industry, as well as in the city of Tashkent, along with Ferghana, Khorezm, Jizzakh, Syrdarya and Tashkent regions.

In this regard, the Cabinet of Ministers and the Ministry of Economy and Industry were instructed to approve, within a month, together with the ministries and departments, sector-based schedules for schemes included in the localization program for 2020.

The head of our state maintained that the key attention in the implementation of projects be paid to competitiveness and socio-economic efficiency, and to the reduction of production costs.

The Uzstandart Agency was instructed to provide business entities with practical assistance in matters of standardization, metrology and certification in the process of mastering the production of import-substituting industrial goods.

Chairman of the Council of Ministers of the Republic of Karakalpakstan, hokims of provinces and the city of Tashkent were tasked with establishing personal control over the timely realization of projects under the localization program.

The Ministry of Economy and Industry, the Chamber of Commerce and Industry were recommended to take, together with local officials, measures to fully and timely fulfill the agreements concluded during the Republican Industrial Fair.

At the videoconference session, senior executives presented reports, and important tasks for the future got identified.