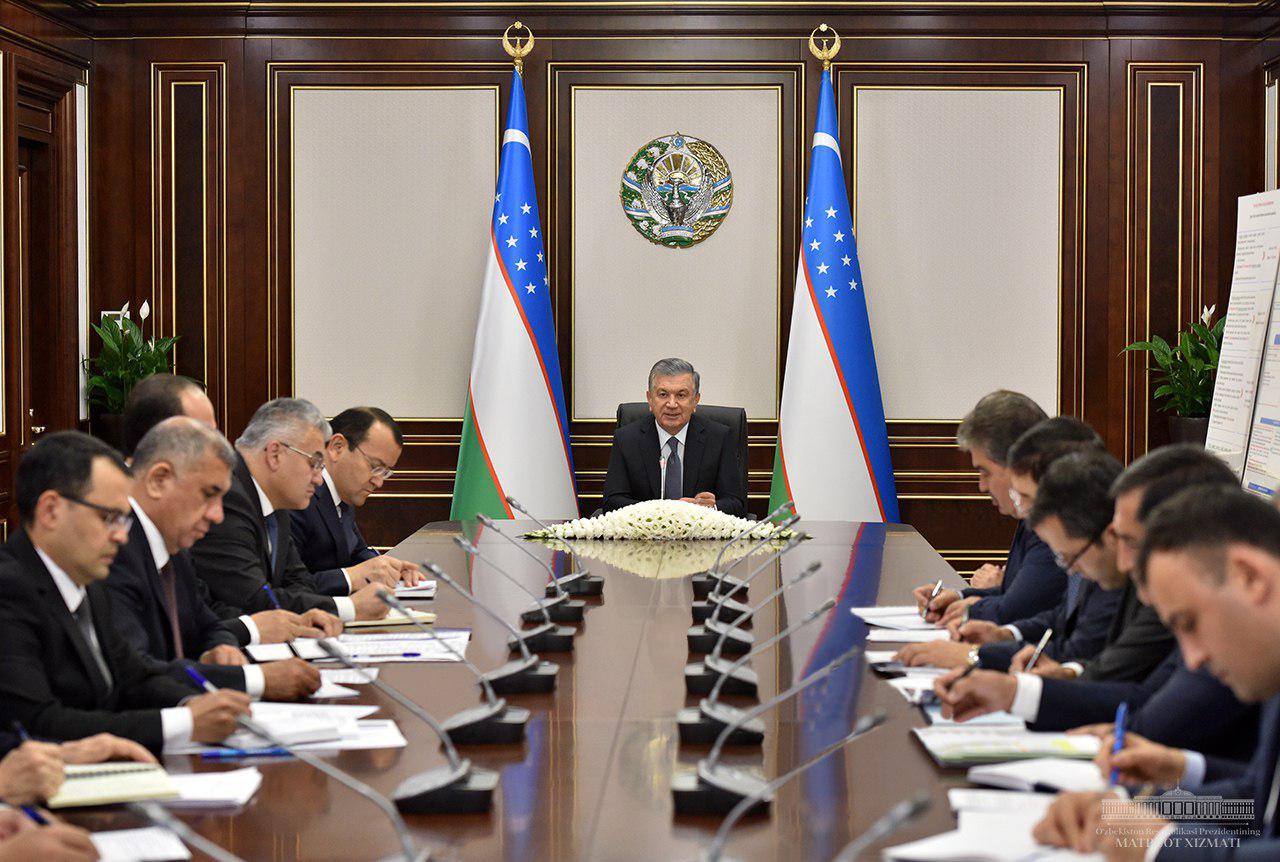 President of the Republic of Uzbekistan Shavkat Mirziyoyev convened a meeting on October 28 to discuss provision of housing for the population and the development of mortgage market.

In 2016, a total of 13 thousand houses were built in the countryside in the framework of government programs, while the private sector erected residential blocks for 13 thousand 189 apartments. In general, 4 trillion 330 billion soums were allocated for these purposes.

In the year 2017, almost 29 thousand housing units were built as part of state programs, including 20.3 thousand in villages and 8.5 thousand in cities. At the same time, entrepreneurs constructed multi-storey buildings for more than 16 thousand flats. In total, almost 45 thousand houses and apartments worth 6.2 trillion soums were built.

Last year, the scope of works expanded considerably. Within government programs, 42.2 thousand units of housing were erected, including 25.3 thousand in rural areas and almost 17 thousand in urban quarters; multi-storey buildings for 19.7 thousand apartments were raised by the private sector. All in all, 12 trillion 133 billion soums were channeled for the construction of nearly 62 thousand houses and apartments.

Over the past period of 2019, nearly 30 thousand houses and apartments were built as part of public programs, including more than 15 thousand in the countryside and about 15 thousand in towns, entrepreneurs erected multi-storey buildings for 19.5 thousand apartments. A total of 12 trillion 24 billion soums has been assigned for the construction of 49.5 thousand units of housing.

According to estimates, in order to fully meet the population’s housing needs, it is necessary to build 145 thousand flats per annum. It requires almost 30 trillion soums, which accounts for more than 23 percent of the national budget.

Naturally, the allocation of a significant part of the state budget to the housing sector alone is impractical. Moreover, without the participation of the private sector, it is difficult for the government to satisfy the housing needs of the population to the full. In this regard, the meeting participants discussed phased implementation of market mechanisms in the mortgage system, increasing the role of the private sector in housing.

The new system provides for a procedure within which the construction of high-rise housing will be carried out by business entities. The government will allot land, as well as funds to banks for mortgages.

Measures will be taken to prevent housing prices from growing and to ensure their affordability. Thus, starting from 2020, a total of 16 thousand families will be granted subsidies from the budget for making an initial contribution on loans and paying interest. Through subsidies to borrowers, 10 percent of the down payment will be covered, along with interest on loans in the part exceeding 12 percent in Tashkent and 10 percent in other areas. This new system will be introduced as an experiment in Andijan, Namangan, Ferghana, Bukhara, Samarkand and Tashkent regions. In other provinces, the current system will continue to run as it does; it will compete with the new one.

The President criticized the lack of clear selection criteria for families in real need of housing, and the abuse of this procedure.

Officials in charge were urged to elaborate transparent criteria for selecting out low-income families, set up permanent working commissions in district and municipal departments of the Ministry of Economy and Industry. The commissions, Shavkat Mirziyoyev stressed, shall include representatives of banks, financial, tax, mahalla and other institutions, while allocation of houses be addressed under wider public discussion.

Special attention was paid to the reform of housing construction system in rural areas. In order to ensure competition in this area and, as a result, quality, the function of the client will be gradually transferred from the engineering company Kishlok Kurilish Invest to the private sector. In 2020, a total of 8 thousand out of 12 thousand houses will be built in accordance with the current procedure, the remaining 4 thousand is to be erected by the private sector. The Ministry of Finance and that of Economy and Industry have been tasked with working out a new procedure for housing construction by the private sector.

Shavkat Mirziyoyev underscored the need for the widespread use of innovative building materials to reduce the cost and improve the quality of housing.

For example, the use of aerated concrete and foam concrete instead of brick will allow for eightfold cut in gas consumption during production and fivefold increase in heat capacity.

The meeting participants also deliberated on issues of uplifting urban planning standards, connecting houses being built in villages to utilities, preventing unauthorized construction of housing on cultivated areas, bolstering the protection of such plots. Corresponding tasks were defined.

Responsible officials reported on the ways to address issues discussed at the meeting; participants identified priority objectives for the future.