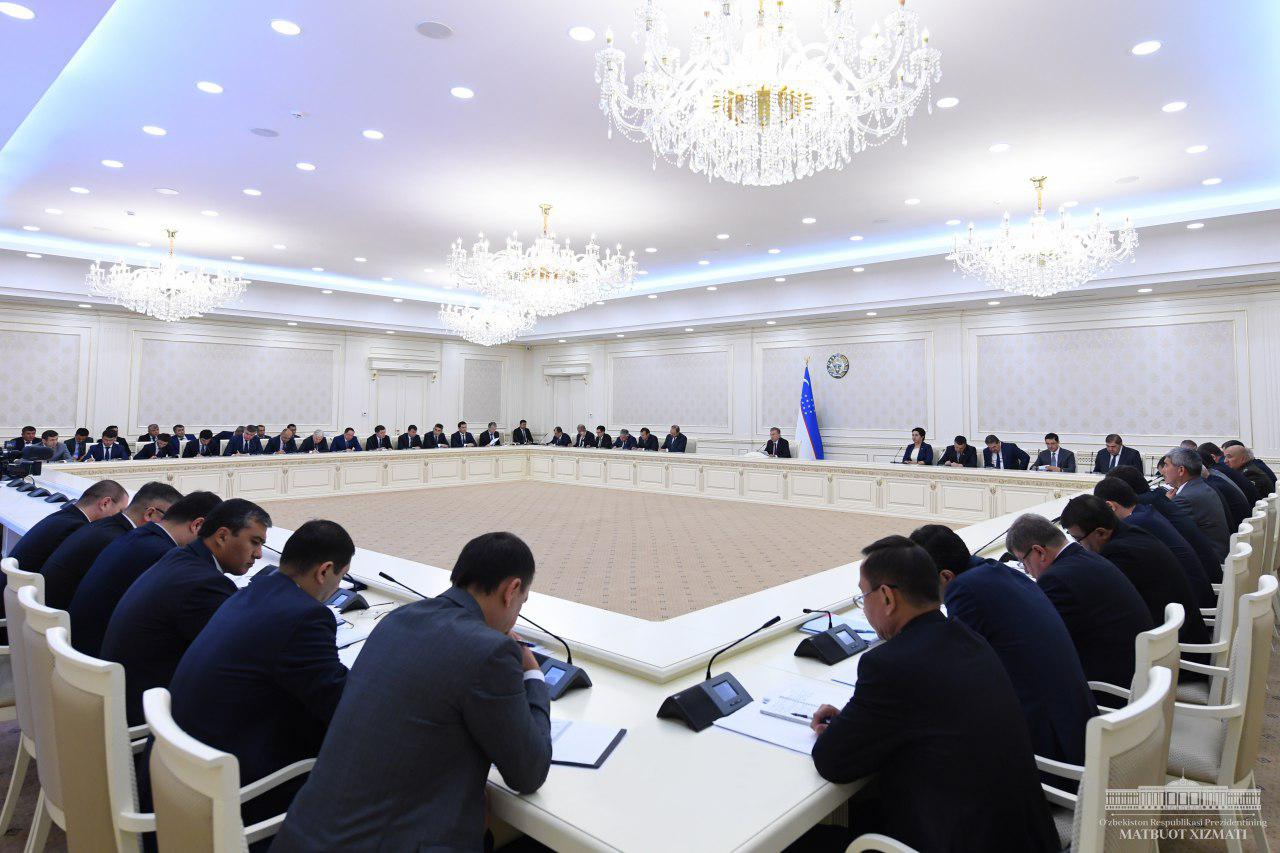 President of the Republic of Uzbekistan Shavkat Mirziyoyev has chaired a videoconference meeting today, On August 2, to analyze the works in progress on the promotion of small business and entrepreneurship.

The session has come to be a logical continuation of a similar event held on July 23. Back then, the participants discussed expansively the systemic problems the sphere has faced, and a number of tasks were identified to support small business. At today’s meeting, in turn, the heads of responsible ministries and agencies as well as regions provided reports on how work is being organized on this front. It was noted that a number of issues that impede the implementation of entrepreneurs’ initiatives can be resolved on the spot, without the intervention of organizations of the national level.

Thus, most of the problems of businesspeople are related to land allocation and connection to infrastructure. However, 8 government agencies, whose conclusions are necessary for the allocation of land, unreasonably delay the time for consideration of documents, sometimes for months.

The President stressed the need to optimize the licensing functions of these organizations as well as reduce the number of issuing agencies and improve the procedure itself through the integration of their databases.

The Cabinet of Ministers, the Ministry of Economy and Industry, the State Assets Management Agency have been tasked with setting up small industrial zones (SIZ) on the basis of unused facilities of large enterprises, and also introduce a procedure in accordance with which 65 percent of the costs of connecting the SIZ to electric networks, water, gas, communications, roads to them will be covered from the national budget.

At a meeting on July 23, the President indicated that demolition of property and seizure of entrepreneurs’ land without payment of compensation is absolutely unacceptable. The head of state noted the need for the establishment of a republican working group headed by the Deputy Prime Minister designed to study the damage suffered by entrepreneurs and reimburse it at market value.

Starting from August 5 this year, work in this direction will be carried out in accordance with a strictly established procedure, in three stages. In the first phase, hokimiyats on the ground submit materials to the Cabinet of Ministers about the facilities supposed to be demolished. At the second stage, a conclusion is prepared: by the First Deputy Prime Minister, related to requirements of urban planning, and by the Deputy Prime Minister, for financial calculations. Finally, these conclusions are submitted to the Prime Minister for consideration and decision.

In addition to financial support for entrepreneurship, the meeting participants also discussed ensuring targeted and efficient use of allocated funds.

In recent years, a huge amount of loans have been provided for the development of entrepreneurship. Over 90 percent of these loans are public funds.

A study of the state of affairs in this sphere has showed that over a thousand entrepreneurial projects funded by bank loans in 2017-2018 encountered problems related to the assignation of land, connection to infrastructure, obtainment of permits, import of equipment and other issues. This, in turn, reduces the return of resources issued.

In this regard, the Accounts Chamber, the Central Bank, and the Ministry of Economy and Industry have been tasked with compiling a list of projects facing such challenges and providing them with practical assistance.

The head of state noted that banks should radically change their work style, support entrepreneurs throughout their activities, and become real business partners of their customers.

Shavkat Mirziyoyev emphasized the necessity of wider attraction of funds of international credit lines to business and development of corresponding proposals in the context of each region of the country. The President insisted that clients be widely informed about the directions and conditions for obtaining such loans through investment centers organized at commercial banks.

The state of efforts directed at resuming the activity of small businesses who suspended their work was also analyzed. Responsible officials were instructed to study tax and statistical data in order to identify the reasons for the downtime of enterprises. Deputy hokims for business development and heads of local departments of the economic complex, according to the President, should work closely with such enterprises and help solve their problems so that they can resume business.

Instructions were given on expanding the tax base through the reanimation of inactive enterprises, the legalization of jobs, and the timely launch of new projects.