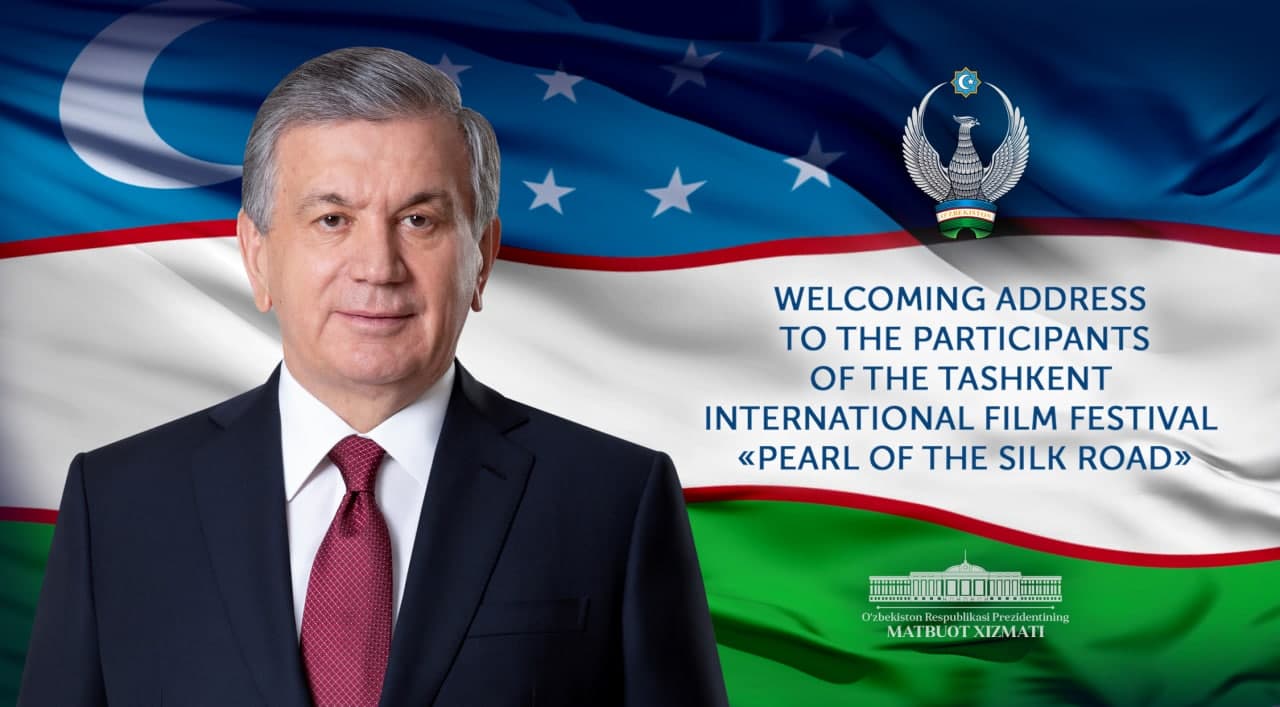 Dear participants of the festival!

First of all, I cordially congratulate all of you – the famous actors and directors, cameramen and artists, producers, film scholars and famous figures of culture – on the opening of the XIII Tashkent International Film Festival «Pearl of the Silk Road».

Welcome to the grand and beautiful city of Tashkent – the gates to the East, to the ancient land of Uzbekistan!

Today, the role and importance of cinema as the most popular and influential form of art are growing in the rapprochement of peoples and cultures, promoting the ideas of peace, friendship and humanism.

In the New Uzbekistan, which we are building now, a special attention is being paid to the development of effective cooperation with the countries of near and far abroad in the sphere of culture, as much as in other areas.

A profound practical step on this path serves the revival of the Tashkent International Film Festival, which has more than 50 years of history and traditions, named anew as the «Pearl of the Silk Road» and its holding under the motto «In the name of peace, enlightenment and progress».

The forum, which is attended by more than 300 masters of arts and world cinema stars from nearly 50 countries, undoubtedly, will become an important dialogue platform for analyzing the processes of the current development of the sphere, creative research and exchange of experiences, defining the prospects for cooperation, as well as a unique master class for young filmmakers.

You are well aware that the Uzbek cinematography, which has a rich history and traditions of more than a century and great works created based on a harmony of national and universal values, secures a worthy place in the world of cinematography.

In recent years, alongside other spheres, a priority is being attached to the development of the cinematography in our country, where such democratic principles as freedom of creativity, healthy creative competition and inviolability of private property are being actively introduced into the sphere.

The activities on strengthening the material and technical base and human resources of film studios, providing them privileges and preferences, creating the feature films of a high artistic level that meet the requirements of the audiences with a delicate artistic taste and popularizing the art of cinema are being raised to a new level.

Dear participants of the festival!

In today’s rapidly changing world, the attitude towards the social reality, the criteria and views towards cinema and art are constantly changing. Certainly, this also affects the development of cinematography, which objectively reflects these processes and the life as a whole – with all of its contradictions and complexities.

I am convinced that the revived Tashkent International Film Festival, which opens up a new page in its history, will be held in the spirit of the best artistic criteria required by the times.

I believe that the XIII Tashkent International Film Festival will become a real celebration of art for the multinational people of Uzbekistan, reveal new names, new talents and leave the best impressions in the filmmakers and all film lovers.

As a part of the festival, you will be able to visit the ancient and modern cities of our country, meet with representatives of various spheres and branches, and get directly acquainted with the large-scale transformations taking place now in the New Uzbekistan.

Once again, I sincerely congratulate all of you and wish you a sound health, creative achievements and success to the work of the festival.

President of the Republic  of Uzbekistan