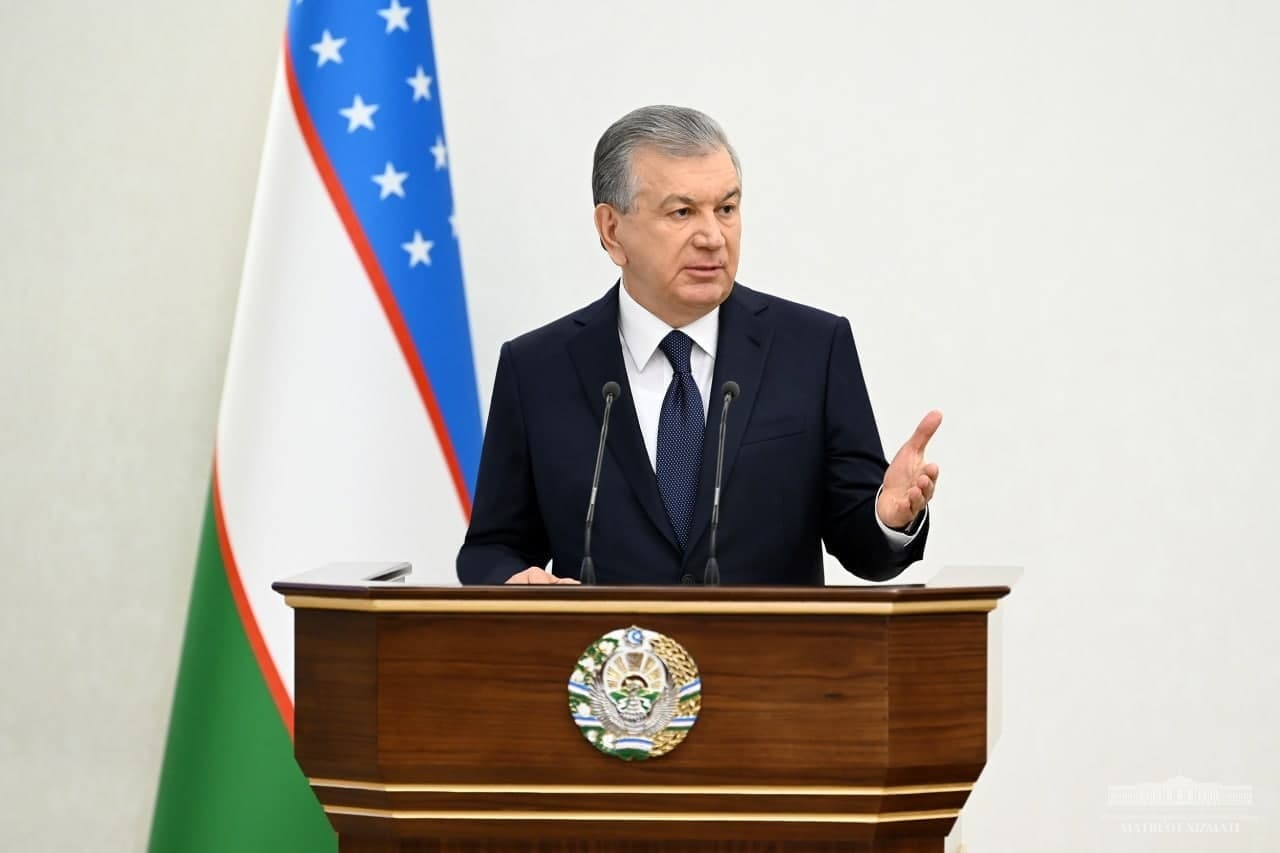 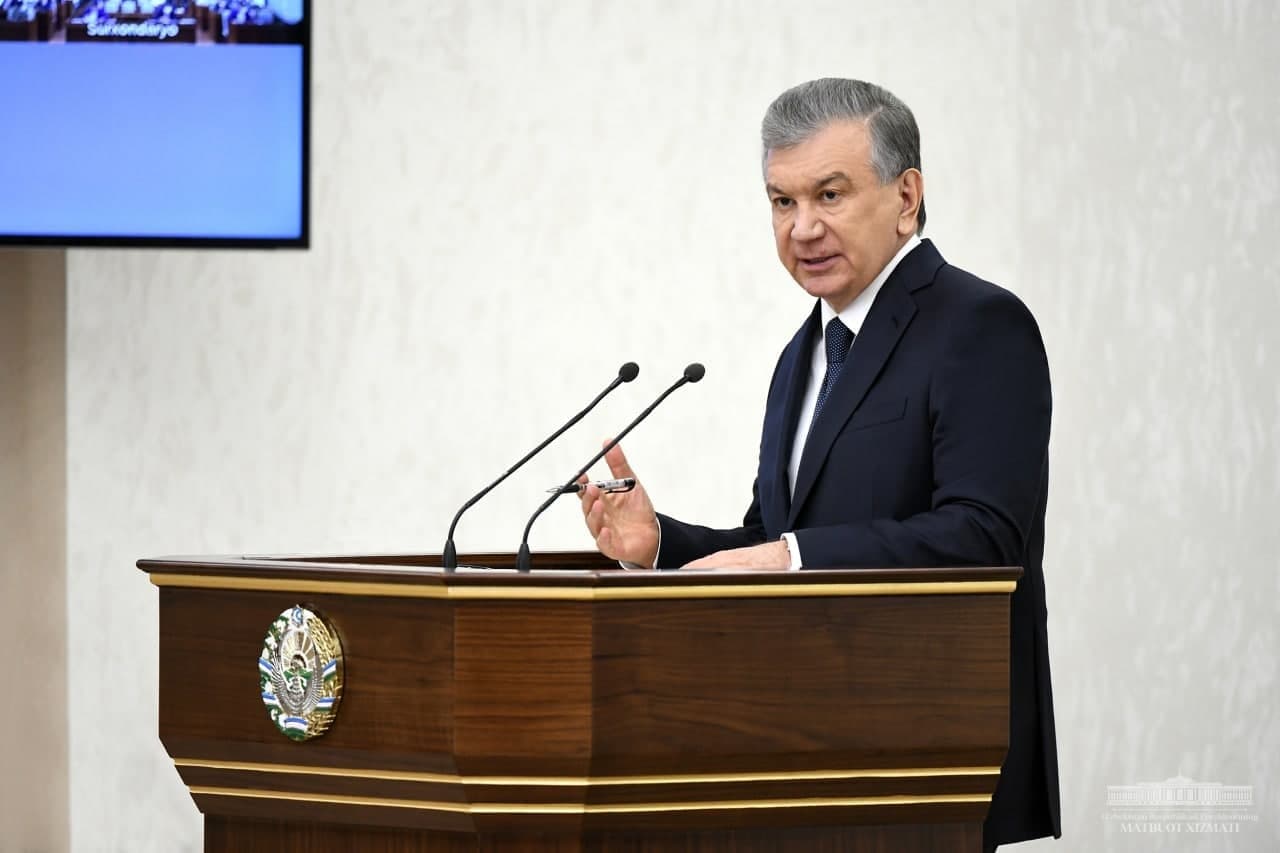 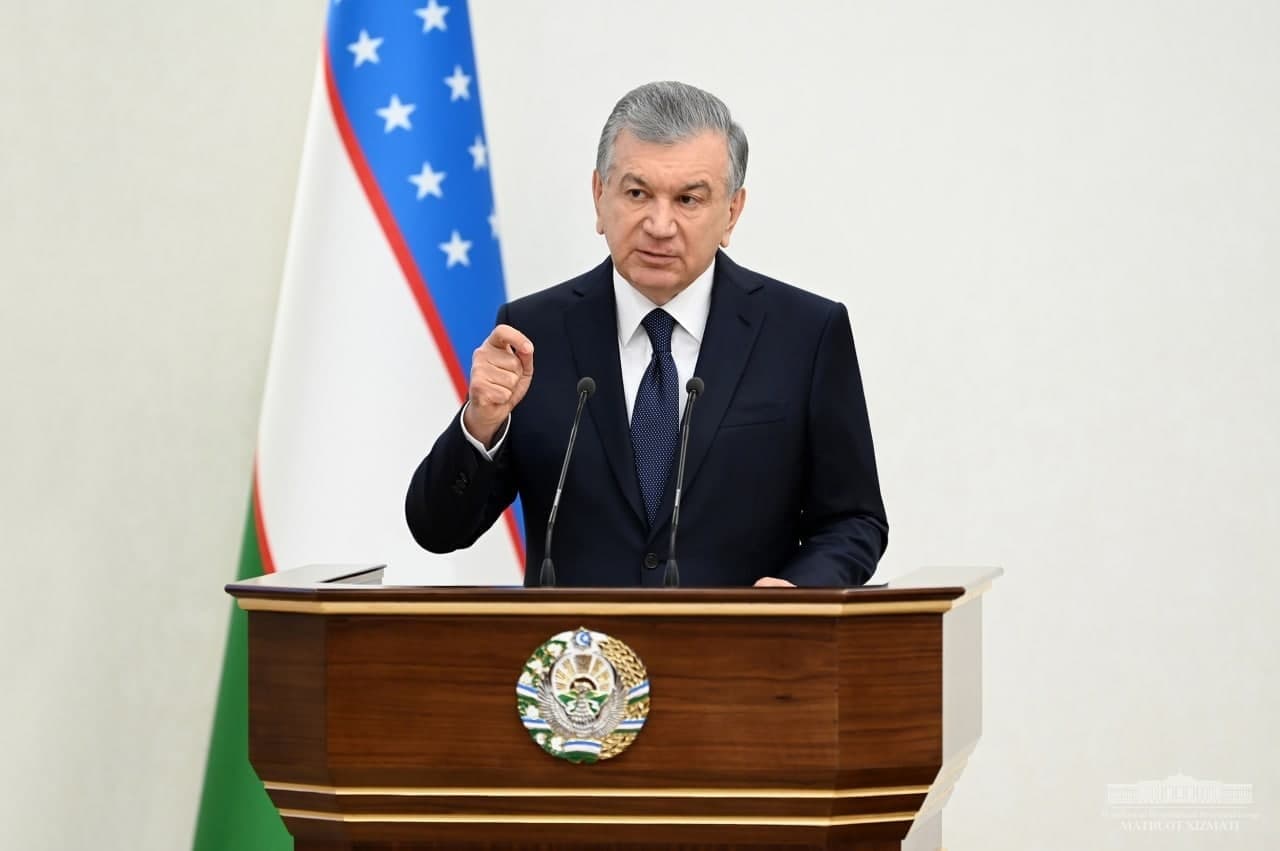 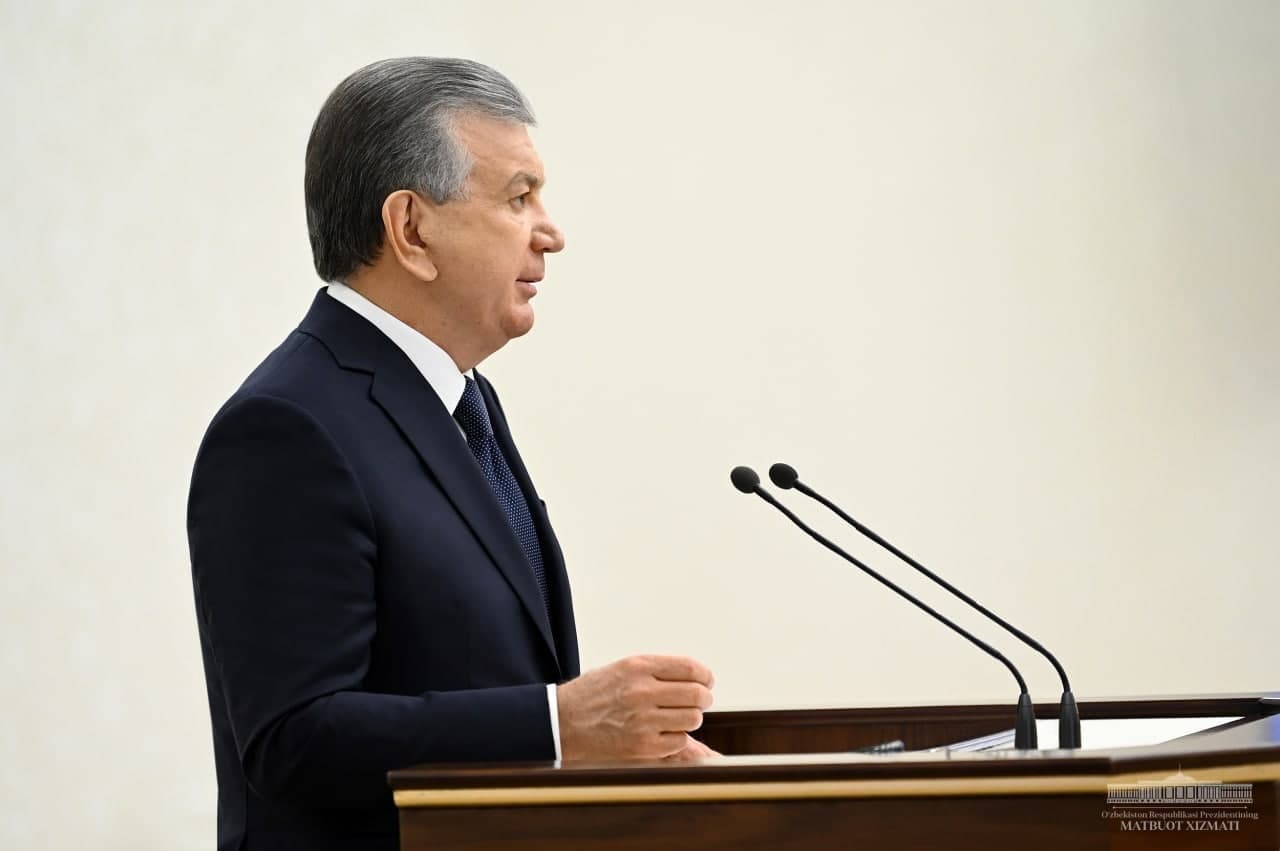 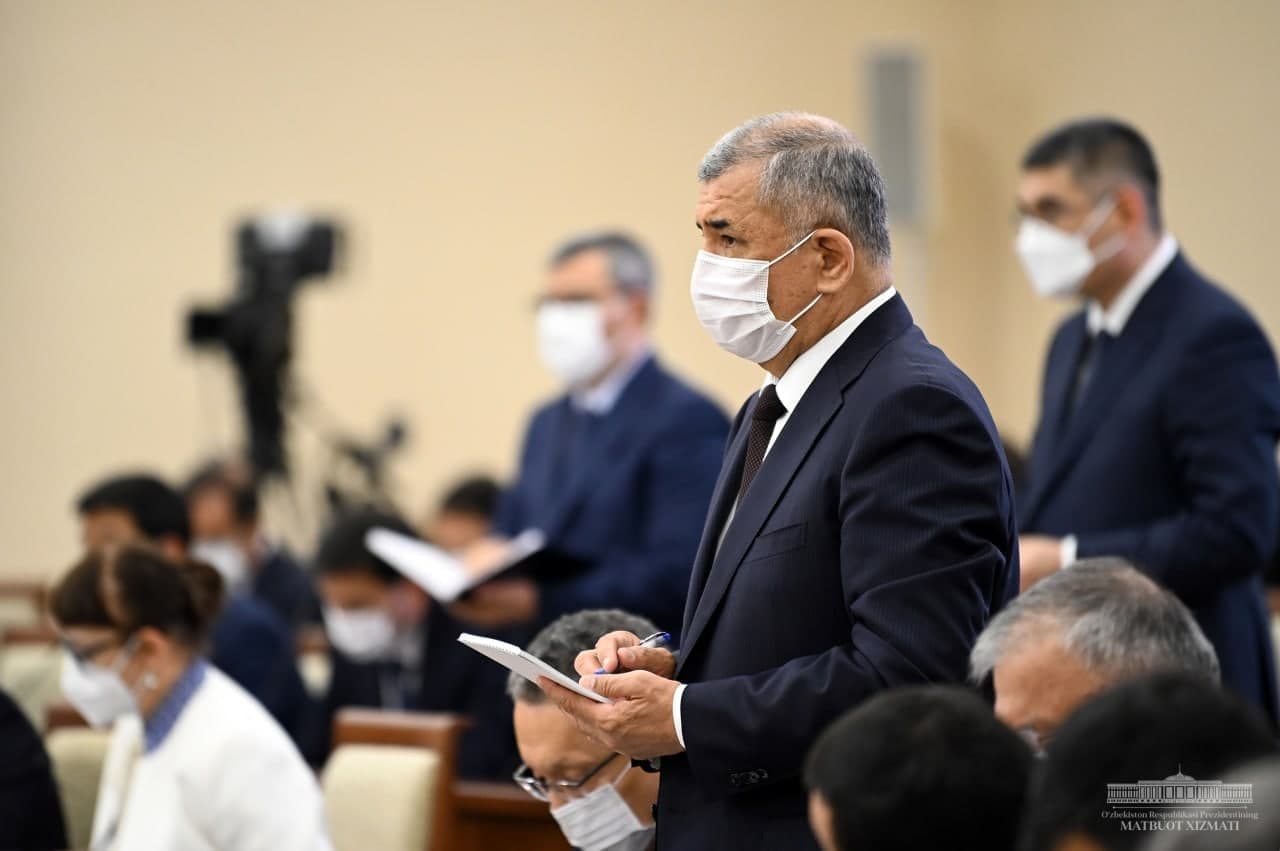 Under the chairmanship of the President Shavkat Mirziyoyev, the videoconference meeting devoted to the analysis of indicators of economic growth in regions and the industries for the first quarter and the priorities for this year took place on May 12.

In difficult conditions of the pandemic, with the state’s full support of economy and entrepreneurs it has been able to preserve the economic stability, operational performance and jobs.

In particular, in the first quarter the gross domestic product of the country grew by 3%, industrial output - by 3.8%, agriculture - by 3.1%. The state budget surplus exceeded the prognosis for nearly 2 trillion Uzbek soums. The exports in January-April made up at the amount of $3.2 billion.

«Indeed, the figures are good. For their achievement, we have adopted laws, resolutions, created tangible opportunities and provided the means. If all heads of the industries «pulled their own carts», these figures would be as higher as twice. The vertical system of the ministries does not work. The heads of the industries lack initiative and their deputies – the powers and sense of responsibility. If we put an end to corruption, if the system works at places, khokims (governor and mayors) of regions, districts and cities will increase the responsibility, the economy will develop by itself»,  said Shavkat Mirziyoyev.

The shortcomings of the certain industries and regions were highlighted at the meeting. Thus, in the first quarter the production in the Uzavtosanoat JSC decreased by 40%, the Uzbekneftegaz -by 4.7%, and in the leather industry - by 10%. While demand for medicines and medical devices sharply grew in recent years, the pharmaceutical production dropped by 22%. Besides, the output at 74 large enterprises of regions decreased to 1.1 trillion Uzbek soums in comparison with last year.

The President has emphasized that in the first half of the year it is necessary to address such backwardness, find and involve additional reserves.

First of all, the energy resources are necessary for economic growth. To fully meet the needs of industries, businesses and the population, Uzbekneftegaz needs to produce 9 billion cubic meters of natural and 165 thousand tons of liquefied gas in the second quarter, and 15.5 billion kilowatts of electricity in the Issiklik Elektr Stantsiyalar and Uzbekgidroenergo systems. The existence of all opportunities for ensuring the high growth rates in such industries as electrical equipment, textile, leather and shoe production, construction materials and pharmaceutics was noted.

At the meeting, the issues on the transformation of the state-owned enterprises were discussed. The instructions on the acceleration of transformation at the joint-stock companies «Hududgaztaminot», «Uzdonmahsulot», «Agroservice» and «Agroleasing» were given.

The issues of investments and export are discussed in details. It was noted that it is necessary to disburse investments for 75 trillion Uzbek soums in the second quarter of this year and owing to this, to introduce the new production capacities within 43 sectoral and 2.5 thousand regional projects.

For instance, in the light industry in Asaka, Gijduvan, Kagan, Karshi, Khatyrchi, Kibray districts and the town of Chirchik, it is planned to commission the large textile enterprises for $220 million, providing permanent employment for about 3 thousand people.

The President has instructed to strictly monitor the implementation of each investment project and to accelerate the launch of enterprises.

By estimates, the export will reach $5.2 billion in the first half of the year.

The President has emphasized importance of full use of the GSP+ system, the beneficiary of which is Uzbekistan, and increases the number of the textile enterprises that meet the «Oeko-Tex» standards.

Besides, it is necessary to develop the training programs on introduction of the international standards and to train specialists of the local enterprises by attracting the foreign experts.

The food security is becoming increasingly important. The prices for meat and vegetable oil on the world market are growing steadily throughout the year. In such conditions, it is necessary to increase food production.

For this purpose, it is envisaged to put into operation 1 thousand livestock and 277 poultry enterprises, grow vegetables, potatoes, rice, melons and fodder crops on more than 1 million hectares of main areas and on lands released from other crops.

The economic complex is tasked with assisting businesses that are not operating at full capacity. It is indicated the need to allocate 1.6 trillion Uzbek soums for family entrepreneurship programs in May-June and through this to create sources of income for at least 30 thousand people. The possibility of creation of 13 thousand new jobs within regional programs, 5 thousand – by providing the free land plots for use, 10 thousand more – through funds for employment, support of women and youth is noted.

The tasks for trade expansion in polyethylene, polypropylene, polyvinylchloride, soda ash and other raw materials on the exchange, provision of additional support of the furniture industry have been set. It will be an important factor of sustainable development of the local enterprises.

The President has criticized work on ensuring efficiency and recoverability of the allocated credit resources.

«The heads of the industries, regions or sectors do not deal systemically with issues of connection to infrastructure of the enterprises created owing to the credits and don’t assist them in searching of sales market», said the President.

The officials are instructed to reveal the problematic enterprises, create conditions for them to an exit from «shadow economy», provide loans with a targeted and specific purpose.

Taking into account the opinions and objections of entrepreneurs, the State Tax Committee was tasked with further improving the systems for registering the value added tax payers and calculating taxes.

Deputy Prime Ministers, ministers and khokims (governors) reported on measures to develop the industries and regions in the first half of the year.