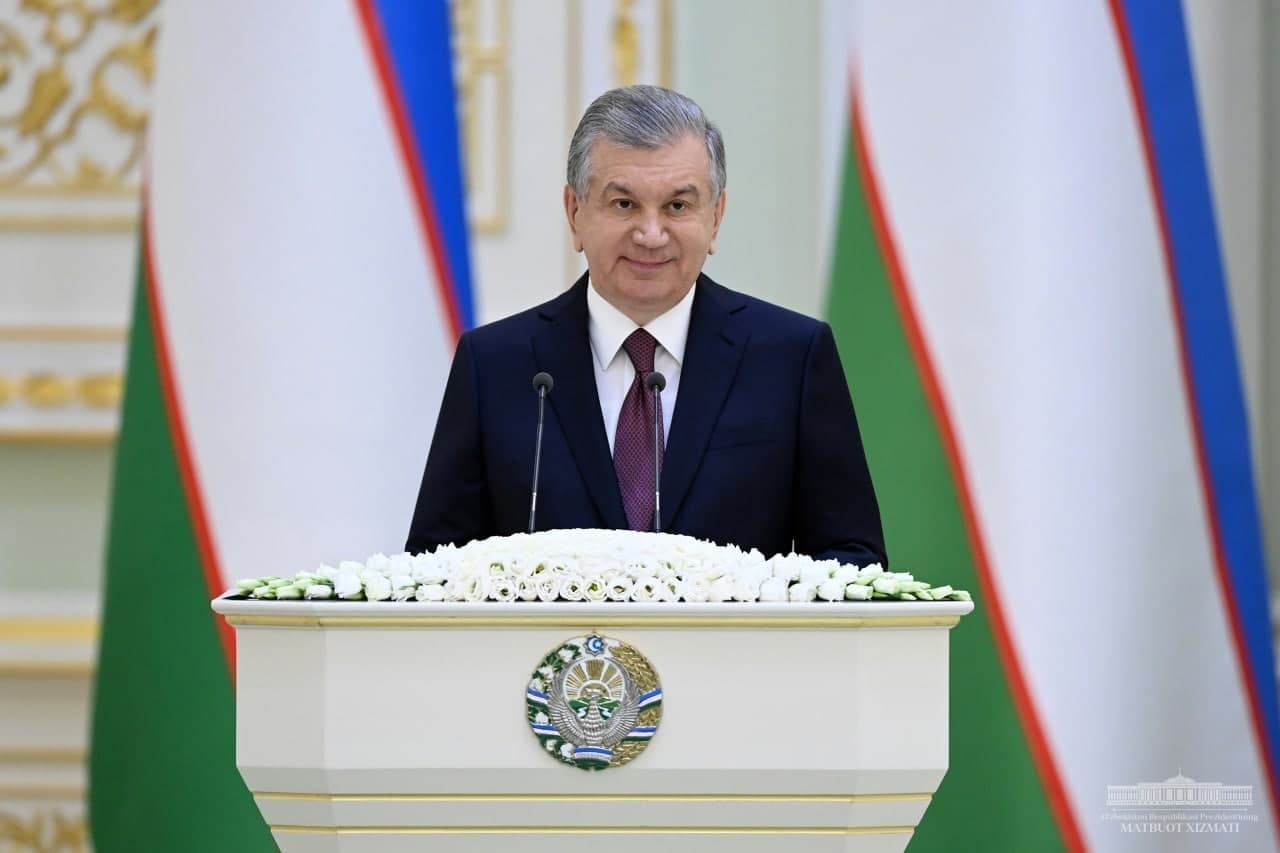 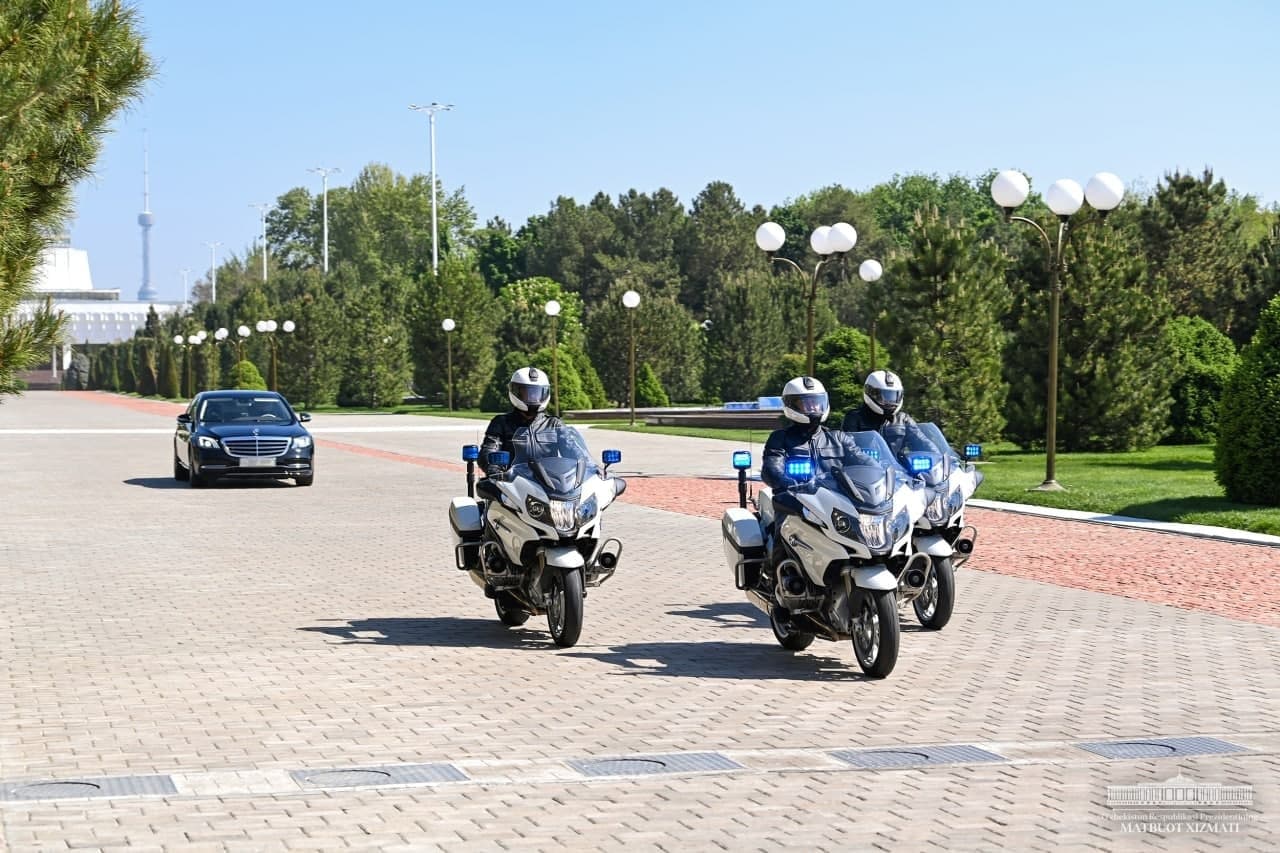 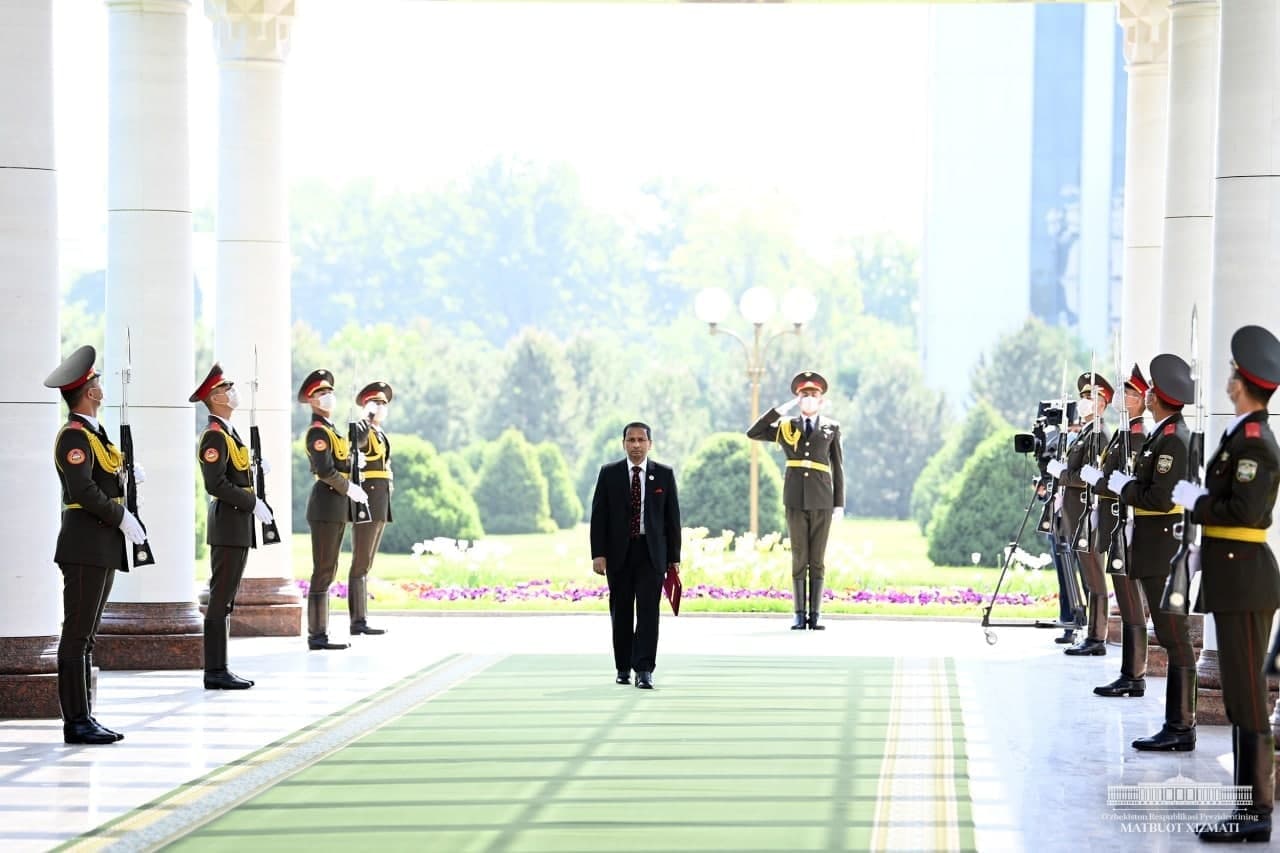 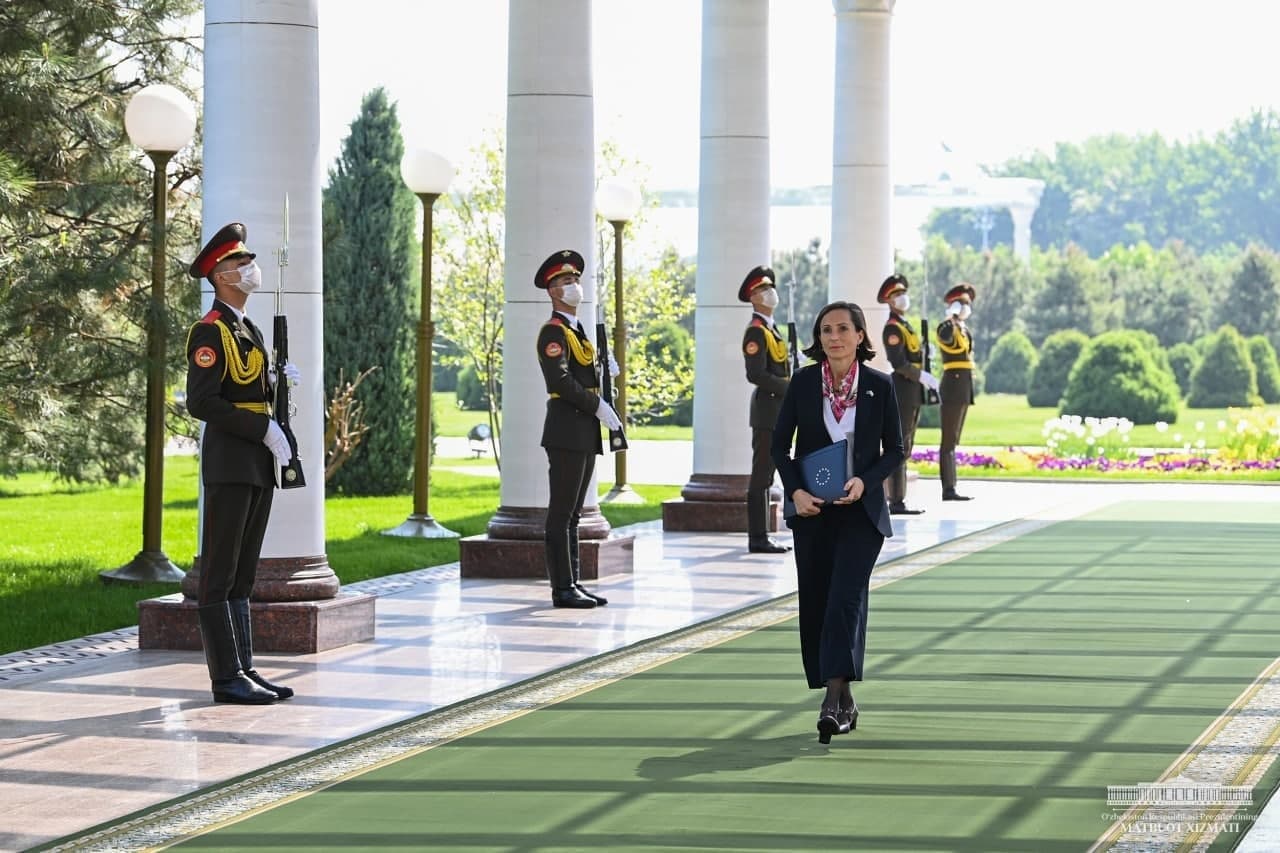 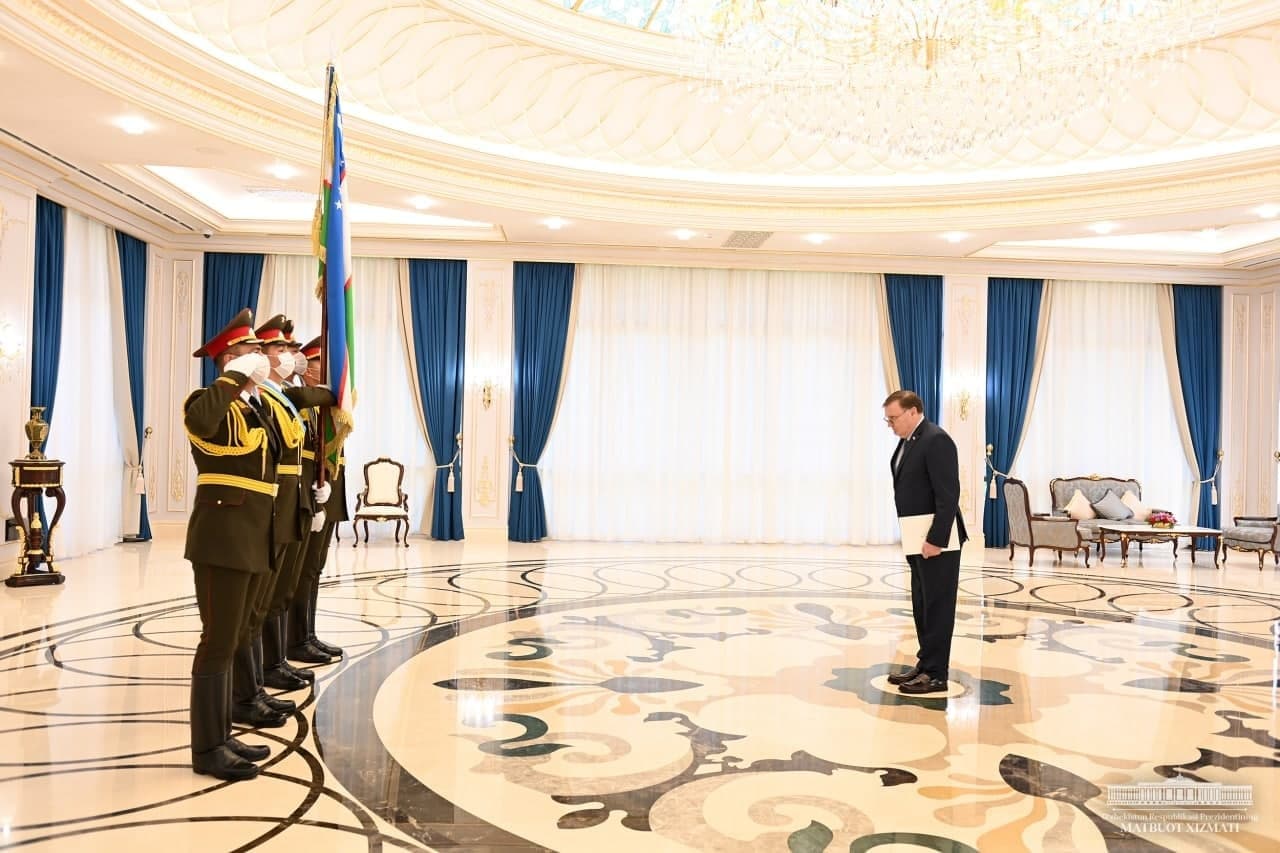 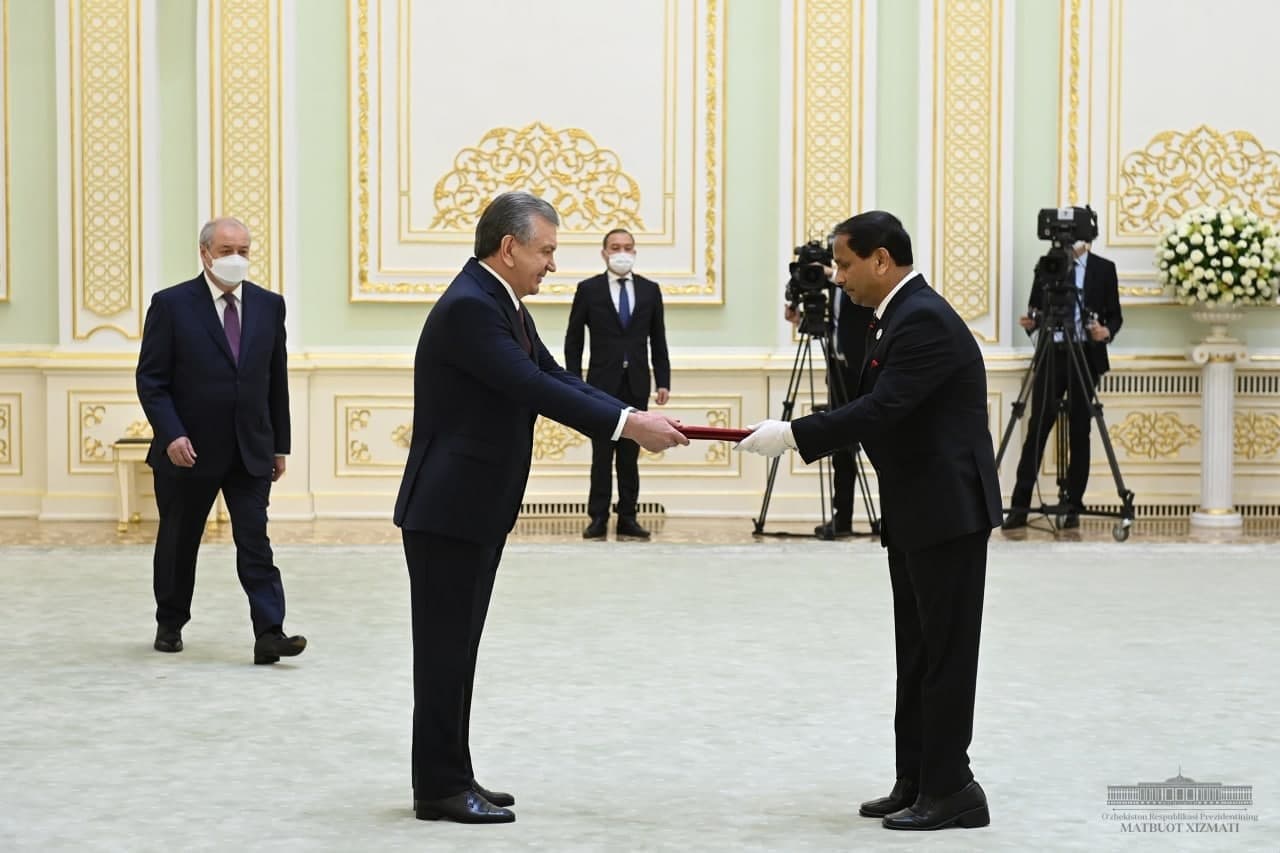 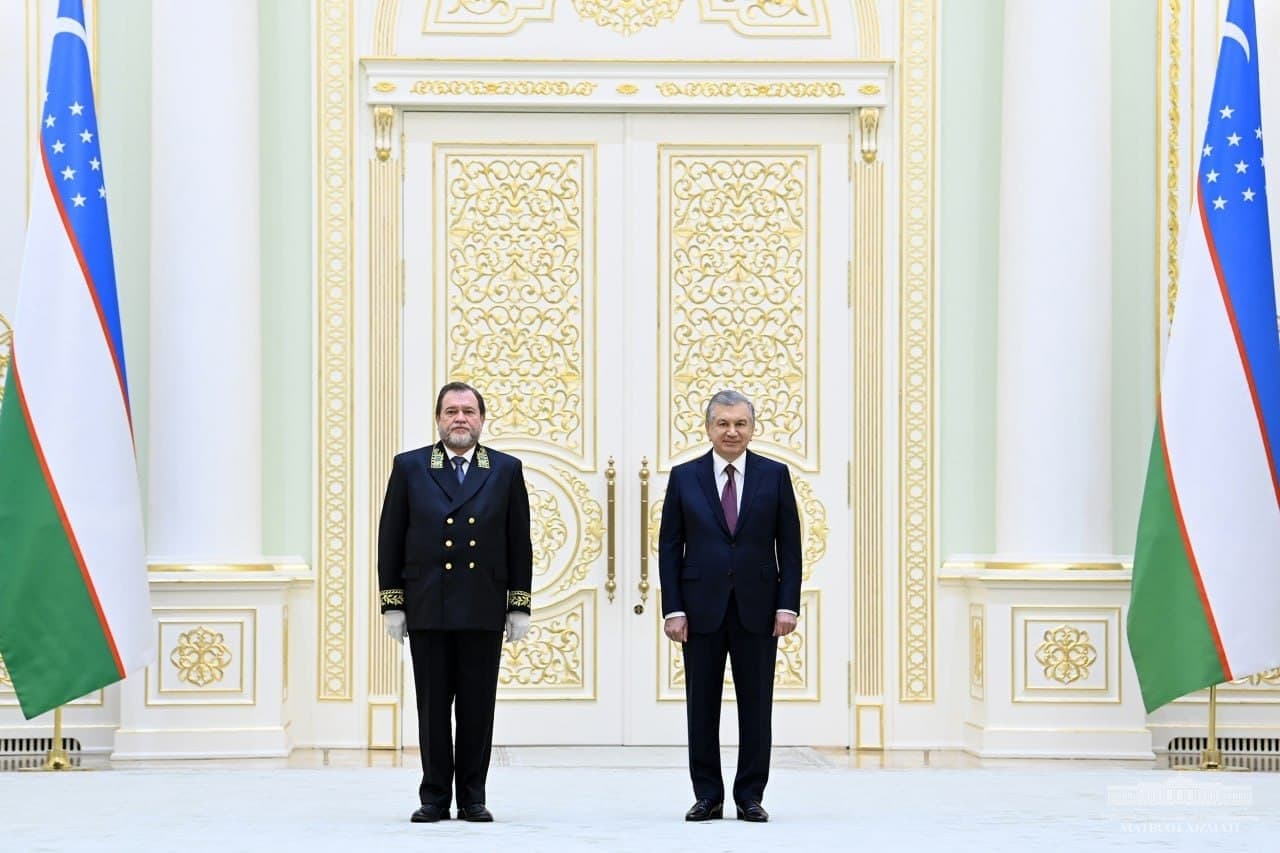 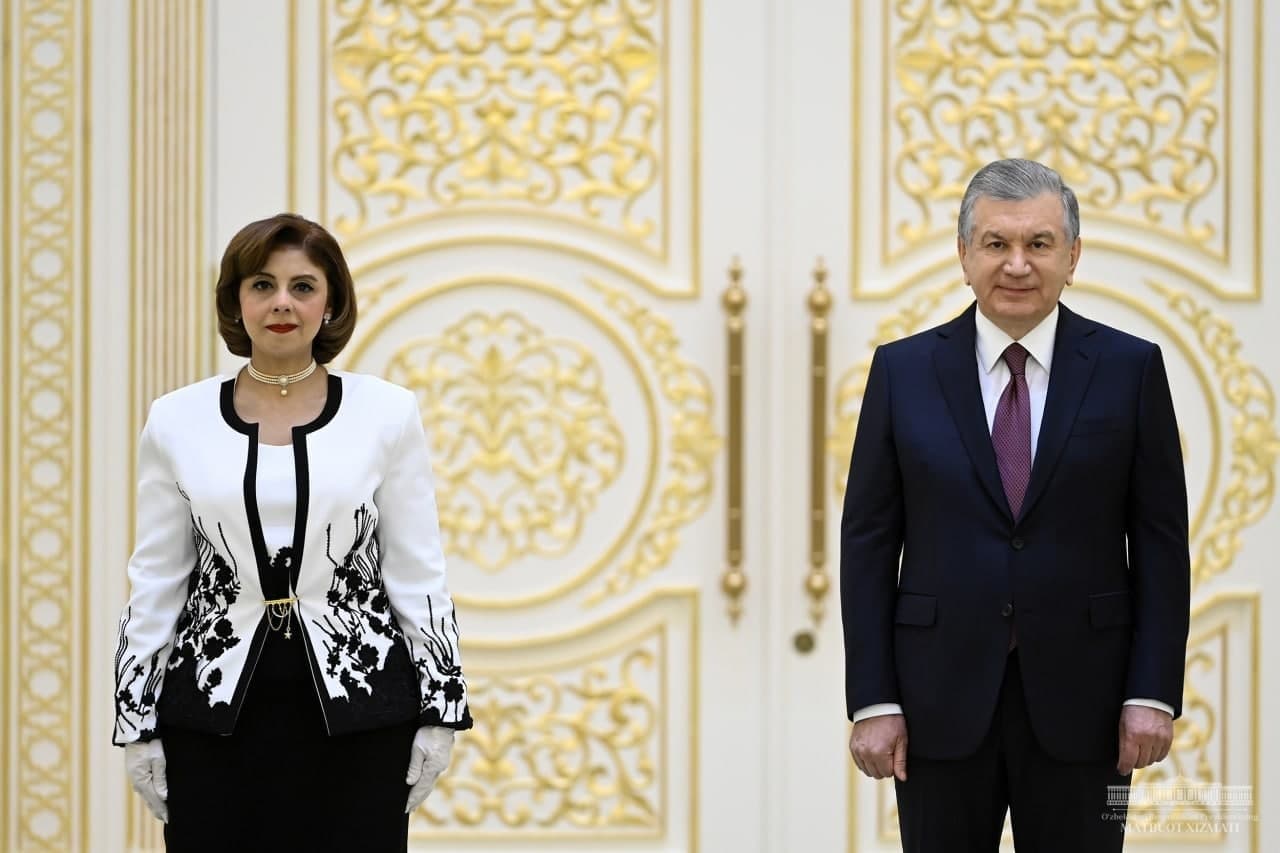 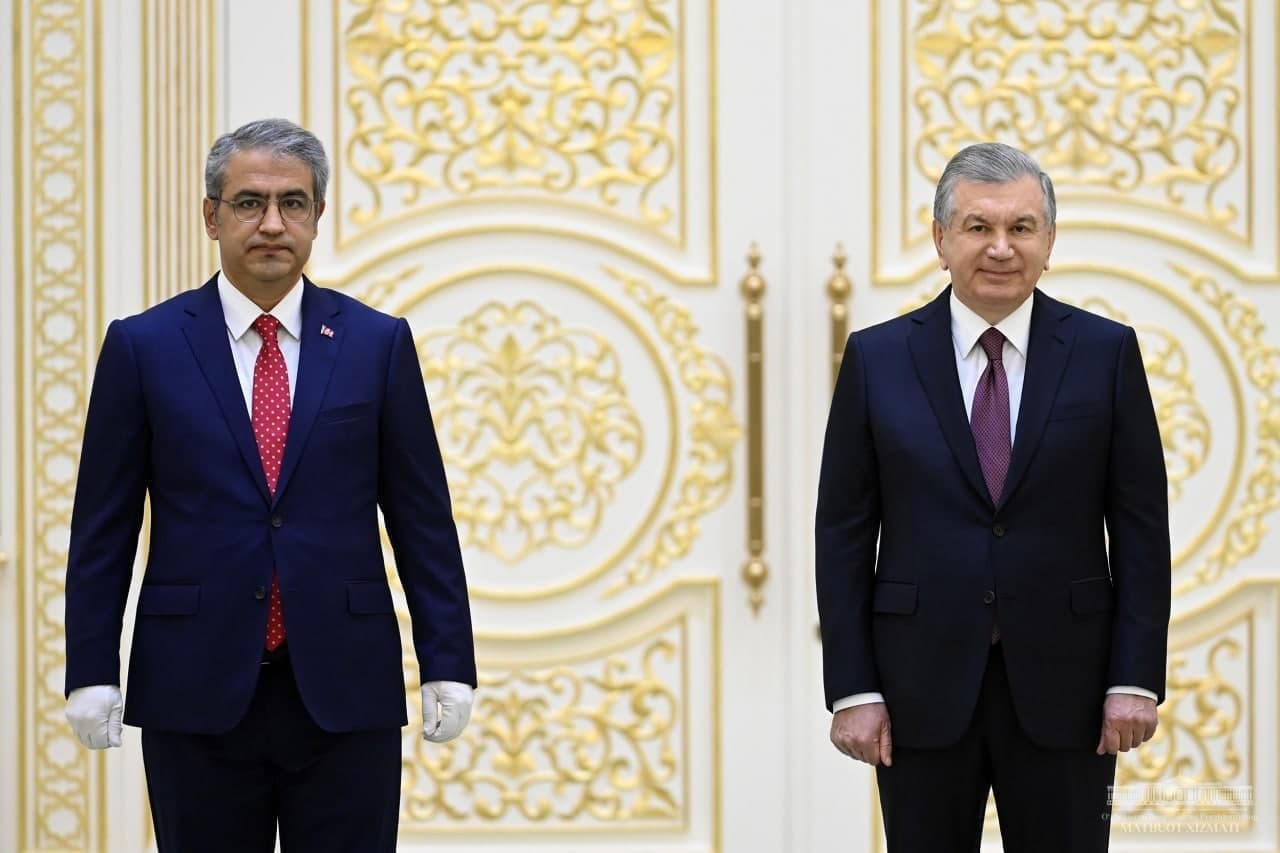 On April 23, the ceremony of granting credentials by the foreign ambassadors newly appointed to our country was held.

The President of the Republic of Uzbekistan Shavkat Mirziyoev accepted credentials of ambassadors of the People's Republic of Bangladesh Mahomad Zahangir Alam, the Czech Republic - Václav Jilek, the Arab Republic of Egypt - Amira Fahmi, the Hashemite Kingdom of Jordan - Demiya Zukheyr Haddad, the Republic of Turkey - Olgan Bekar, Head of the delegation of the European Union – Charlotte Adrian and the Ambassador of the Russian Federation - Oleg Malginov.

As it was underlined, Uzbekistan attaches importance to further development of constructive dialogue, expansion of the mutually beneficial cooperation and practical interactions with foreign countries and the international structures.

The priorities of the democratic transformations, strategic programs and projects aimed at formation of new Uzbekistan are especially noted.

Overcoming consequences of a pandemic and ensuring sustainable social and economic development, targeted support of all population groups and increase in their living standards, formation of new points of long-term growth and ensuring global competitiveness of our state are on the focus.

Speaking about the key directions of foreign policy, the Leader of Uzbekistan has emphasized consistently strengthening relations of strategic partnership and multidimensional cooperation with the countries of the region of Central Asia and the leading states of the world.

Today through the joint efforts the interactions in the sphere of trade, investments and innovations, digital technologies and «green economy», transport, transit and logistics, finance, medicine and many other spheres are extending.

Along with it, Uzbekistan supports close dialogue and deepens multilateral communications in the framework of the United Nations, the CIS, SCO, the Organization of Islamic Cooperation, Turkic Council and other high-profile structures and increases partnerships with global financial institutions.

The President has in particularly dwelled on the prospects of full-scale and long-term cooperation with the countries, which are represented by the newly-appointed ambassadors.

Bangladesh is our important partner in South Asia. Our friendly people are historically linked by the common spiritual and cultural values, sacred religion.

The importance of regular bilateral political consultations, strengthening the cooperation in the textile industry, pharmaceutics, agriculture and other spheres is noted.

Both countries have all the opportunities for cardinal increase in mutual trade and tourist flow. For this purpose, it is necessary to intensify contacts and fully involve the capacity of the joint Intergovernmental commission.

Our reliable and perspective partner in Europe is the Czech Republic.

The Leader of Uzbekistan has noted with satisfaction the dynamic development of the bilateral relations in recent years. Despite a pandemic, the turnover of goods between our countries has tripled last year having exceeded $500 million.

As the main objective the following spheres are defined: the formation of the portfolio of joint projects in such areas as high technologies and innovations, automotive industry, agricultural mechanical engineering, power, medicine, education and tourism. It will serve for elaborating the hectic agenda of the future summits.

Addressing the Ambassador of Egypt, the President of Uzbekistan emphasized that today the bilateral relations reached a quality new level.

They were propelled by the productive outcomes of the historical visit of the President of Egypt Abdel-Fattah As-Sisi in September 2018 to our country.

It is proposed to use effectively the highly untapped potential of cooperation, including stirring up the institutional mechanisms of interactions.

A special attention is paid to implementation of specific projects and programs in the agriculture, textile industry, pharmaceutics, trade, tourism, education and other spheres.

The in-depth study and advancing the ideas and values of the educated Islam are defined as one of the key directions.

The President emphasized the importance of further development of the bilateral relations with Jordan – the close and reliable partner of Uzbekistan.

To stir up the partnerships, it is important to create a necessary legal basis, adjust trade, cooperation and business contacts, prepare the program of cultural and humanitarian exchanges.

Besides, close dialogue and mutual support within the UN, OIC and other distinguished international organizations will be continued.

The President of Uzbekistan has highly appreciated the modern level of the relations of strategic partnership with Turkey reached due to regular and top-level productive contacts.

At present, the trustworthy political dialogue is established. Despite a pandemic, the active exchanges of delegations are continuing. In particular, in recent months the delegations headed by Ministers of Foreign Affairs and Trade of Turkey visited Uzbekistan.

With participation of the high-profile Turkish companies and banks the large trade, investment and infrastructure projects are implemented. The interregional relations are established, the joint programs and events in the spheres of education, culture and cinema are successfully held.

The preparations for the forthcoming summits – the regular meeting of the Turkic council in Istanbul and an official visit of the President of Turkey Recep Tayyip Erdoğan to Uzbekistan are now underway.

The European Union traditionally acts as the important strategic partner of our country.

In recent years, the multidimensional cooperation between Uzbekistan and the EU based on the principles of equality, mutual respect and trust gained a new dynamics.

The full support given by the European partners to the democratic transformations, which are carried out in Uzbekistan, the economic reforms and processes of transformations, is especially noted. The granting of the status of the beneficiary of the EU General System of Preferences to our country is mentioned as a joint success and important achievement in the bilateral relations.

The confidence is expressed that the set top-level events will lead to a fundamentally new phase of the Uzbek-European multidimensional relations.

As the President has emphasized that the strategic partnership and alliance of Uzbekistan and Russia reached an unprecedentedly high level.

The significant progress in all directions of the interactions is observed thanks to the joint efforts and mutual support.

The large projects and programs in trade, investments, power, industry, metallurgy, agriculture, transport, infrastructure, banking and financial sector, education, healthcare, culture, tourism and many other spheres are being implemented.

The International exhibition Innoprom, which was recently held in Tashkent for the first time and organized outside Russia has once again showed the huge potential and possibilities of the full-scale cooperation.

Besides, the mutually advantageous dialogue within the CIS, SCO, the Eurasian Economic Union and other international structures is deepening.

It is noted that now the parties conduct serious preparations for the forthcoming Summit of Presidents Shavkat Mirziyoyev and Vladimir Putin in Moscow, which has to mark the beginning of a new historical stage in development of the bilateral strategic and allied relationships.

In conclusion, the President has sincerely wished the heads of diplomatic missions a great success and achievements in realization of their responsible and honorable missions for strengthening of the bonds of friendship and multidimensional cooperation with Uzbekistan.

Besides, a short conversation of the President of Uzbekistan with the newly appointed ambassadors took place.

The diplomats have thanked for a warm welcome, favorable conditions for a productive activity and noted that they will make all their best for comprehensive development of the bilateral ties.