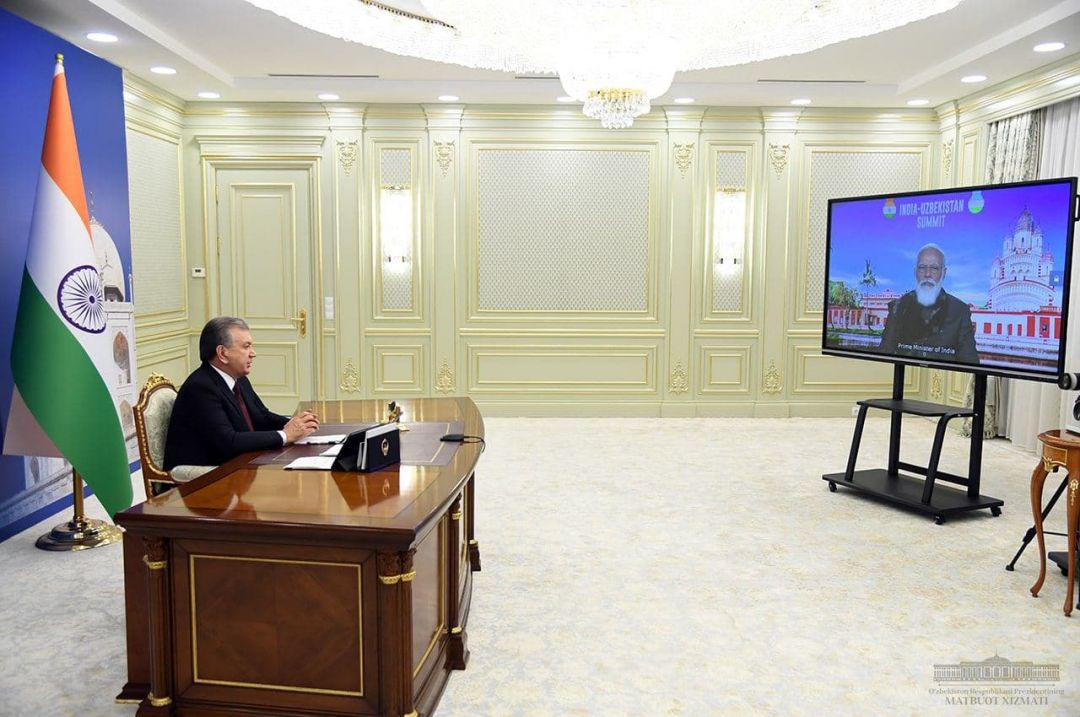 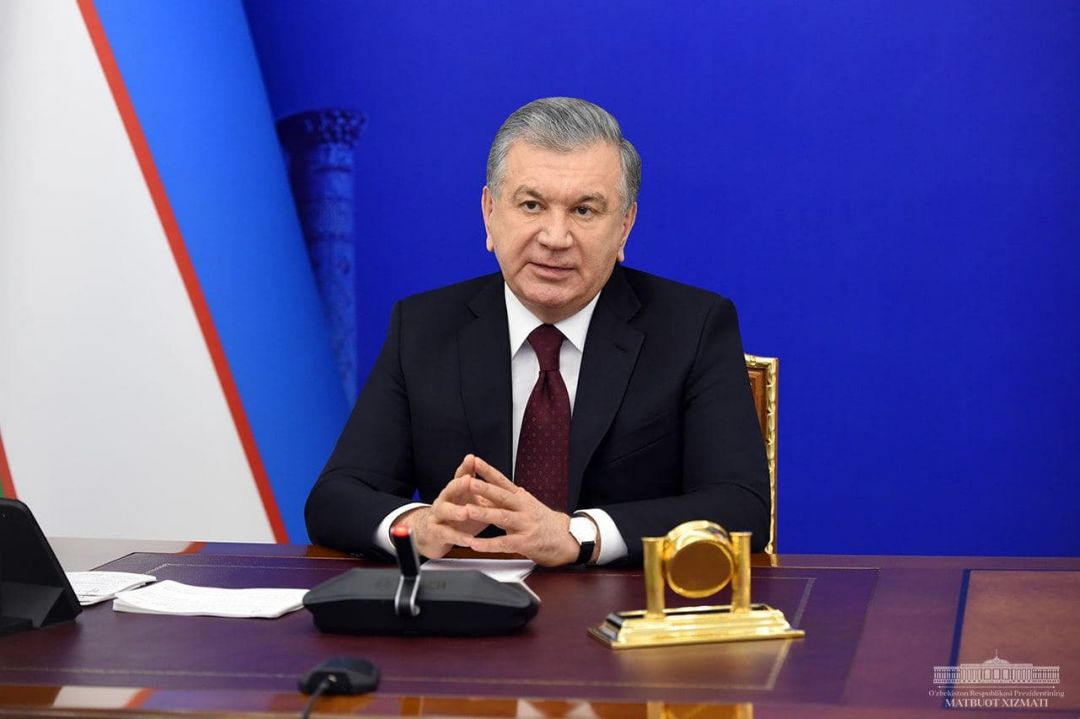 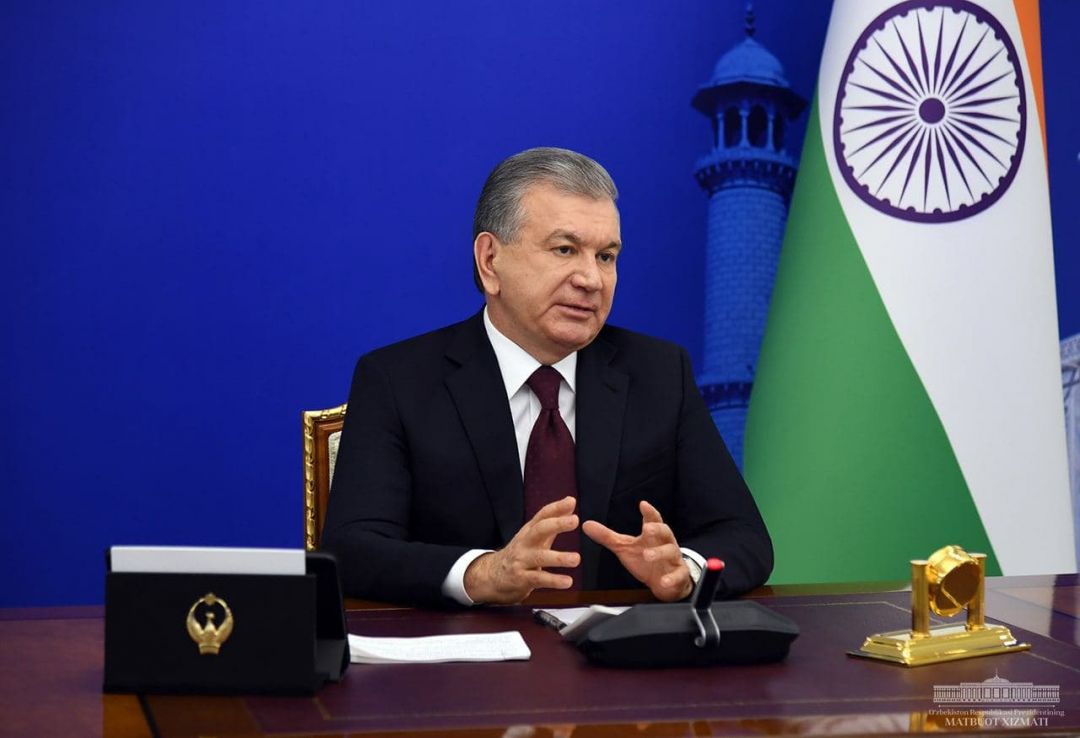 The online talks helped discuss issues related to furthering the political dialogue, enhancing the bilateral interaction in trade- economic, investment, financial and technical, educational, cultural- humanitarian and other spheres. The sides also exchanged views on the developments in the world and the prospects for regional cooperation.

Greeting each other, the leaders noted that this highest-level event is suggestive of the successful Uzbek-Indian strategic partnership relations as well as an opportunity to “synchronize watches” and jointly identify new growth points for effectively overcoming the impact of the pandemic.

The parties emphasized with satisfaction that thanks to regular contacts at the highest level and practical steps in recent years, a breakthrough has been achieved in the advancement of comprehensive interaction, which is filled with concrete practical substance.

Exchanges have been active across spheres. This year, the two countries successfully held joint sessions of the Coordination Committee and the Intergovernmental Commission, political consultations, as well as the second meeting of the Central Asia - India Dialogue.

The volume of trade is growing. The global crisis notwithstanding, the bilateral turnover has increased by seven percent since the start of this year.

Important projects and programs are spearheaded in investments, innovation, healthcare, education and other priority areas. In recent years alone, the number of joint ventures has tripled; branches of leading Indian universities, Amity and Sharda, have been launched in Tashkent and Andijan, respectively.

Our two nations entertain similar postures, closely interact and support one another within international and regional organizations, including the agencies of the United Nations, the Shanghai Cooperation Organization and other institutions.

Prime Minister Narendra Modi sincerely congratulated the head of our state on the election of Uzbekistan to the UN Human Rights Council, which, in his words, is an international acknowledgement of the democratic reforms underway in our country.

During the online talks, the two leaders spoke for the continuation of trust-based and systematic dialogue in the political sphere, including regular consultations and the adoption of a medium-term program of cooperation between the foreign ministries. They proposed to intensify interaction along the inter-parliamentary realm.

As a benchmark in the trade and economic interaction, the goal was set at $ 1 billion in trade turnover in the coming years.

An agreement was reached on joint work to deliver conditions conducive for growth in bilateral trade, to eliminate technical barriers and restrictions on this path.

Much attention was paid to the formation of efficient transport corridors and logistics infrastructure, the resumption of air traffic.

Promotion of promising investment projects, including those with the attraction of the advanced technologies, technical assistance and concessional financing of leading Indian companies and institutions, was also considered. Agriculture, innovation, alternative energy, pharmaceuticals and healthcare, information and communication technologies, and space research have been designated as priority areas.

The leaders agreed to expand contacts among regions of our two countries, building on the example of successful partnership between Andijan region and the state of Gujarat.

In the humanitarian sector, Uzbekistan and India will support joint programs in education and training as well as cinematography, exchanges between youth organizations, the studies of national cultures and languages, and the restoration of historical heritage sites.

The creation of modern medical centers in the provinces of our country with the introduction of the traditional Indian Ayurveda system and telemedicine was proposed. New Delhi will support the activities of the National Yoga Federation of Uzbekistan.

The video summit also served to discuss pressing issues in countering contemporary threats and challenges to security and stability. The importance of continuing close coordination and information exchange on this front was stressed. The two sides expressed mutual support for international efforts towards the soonest peace settlement in Afghanistan.

At the end of the meeting, President Shavkat Mirziyoyev reaffirmed the invitation to Prime Minister Narendra Modi to pay an official visit to Uzbekistan next year.

The two leaders expressed deep satisfaction with the outcomes of online negotiations that took place in a traditionally open, constructive and confidence-based spirit, and which also demonstrated the enormous potential of the bilateral cooperation.

In addition, within the framework of the meeting, a number of bilateral documents were signed in the field of economy, innovation, financial and technical assistance, customs and technical regulation of trade, training and joint scientific research.