Shavkat Mirziyoyev: Our only path is to boost entrepreneurship, realize the business potential of people 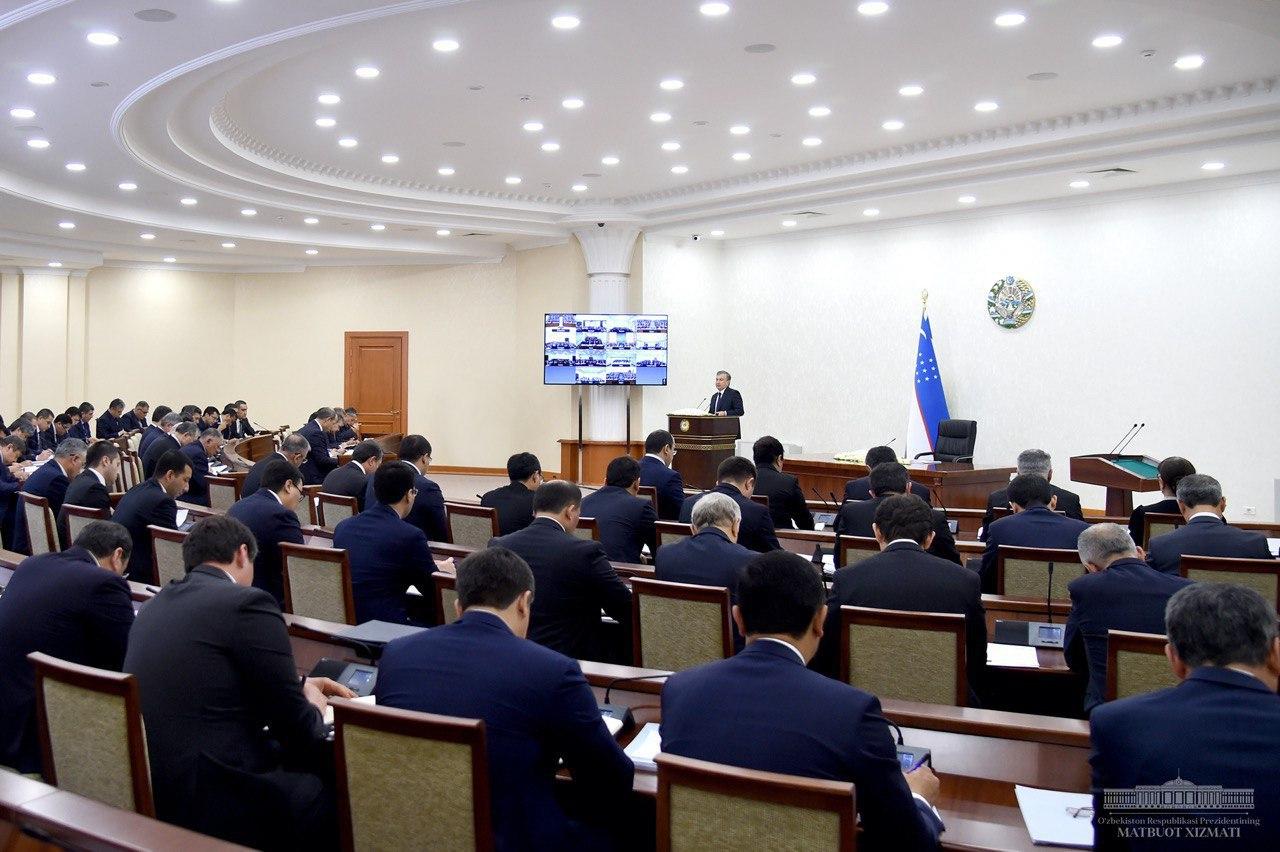 On January 8, President of the Republic of Uzbekistan Shavkat Mirziyoyev chaired a videoconference meeting on the priority tasks of fulfilling the parameters of the national budget and promoting entrepreneurship.

A national tax system has been formed in our country building on international best practices and conventional experience. The number and rates of taxes have been optimized. The value added tax rate has been reduced from 20 to 15 percent. As a result, last year, 2 trillion soums remained at the disposal of entrepreneurs.

On 1 January 2020, Tax Code in the new edition entered into force. It is worth reminding that to secure economic growth in this and subsequent years, tax reform has been introduced.
To this end, efforts are in progress to support entrepreneurship and steadily increase budget revenues.

“Our only path is to boost entrepreneurship, realize the business potential of people! Every hokim should take the initiative to secure additional revenues to the budget, create conditions for entrepreneurs and work side by side with business representatives,” the head of state insisted.

The methods of work of local executives have been criticized at the meeting. The President pointed to the absence of accurate calculations on consumption and payments for energy resources, indifference to issues of concern for entrepreneurs. Last year, for example, inactive business entities grew in number in the Mirzo Ulugbek, Ghuzar and Mubarek districts.

“Even one case of suspension of activities by an entrepreneur should be considered extraordinary,” Shavkat Mirziyoyev noted. “Increase in the number of competitive business entities is the basis of economic stability.”

The meeting participants identified tasks for hokims, their first deputies, tax bodies and financial departments – to ensure revenues to the budget in the first quarter of this year.

The President indicated urgent need for the organization of new business entities and assistance to entrepreneurs who have suspended work. To do this, the existing gas, electricity and water supply networks, road infrastructure should be improved and new ones built. Therefore, hokimiyats were instructed to channel extra revenues primarily to perk up local infrastructure.

Vast new capacities can be created provided that the 263 hectares of space and over 50 thousand facilities of small industrial zones with ready-made infrastructure are used effectively. The Agency for Management of State Assets, the Ministry of Economy and Industry were tasked thus with elaborating relevant target programs together with local hokimiyats.

Instructions were voiced on the accounting of resource tax payers and their facilities in the context of each district, on the legalization of jobs and activities of entrepreneurs.

Particular attention was paid to reducing consumer debt for electricity and natural gas.

It was noted that in Tashkent, Syrdarya, Samarkand, Navoi and other regions, receivables increased, large-scale larceny cases were revealed at gas stations. This, along with damage to the financial condition of energy producers, leads to disruptions in the power and gas supply to entrepreneurs.

The head of state emphasized the need to curb such cases, reduce debt for electricity and natural gas, and ensure uninterrupted delivery of these resources to individuals and business bodies.

Navoi and Almalyk mining and metallurgical plants, Uzbekneftegaz, Uztransgaz, Uzkurilishmateriallari, Uzkimyosanoat and other foremost enterprises and organizations have a significant impact on budget indicators. From now on, the recently created Inspectorate for Major Taxpayers will deal with the proceeds from them.

Deputy Prime Ministers and advisers to the Prime Minister have been instructed on a monthly basis to discuss production indicators at enterprises within their subordinate facilities.

Another important factor in boosting budget revenues is government assets. Last year, enterprises with public share paid as little as 1.6 trillion soums of dividends to the budget.

In this regard, the responsible officials were entrusted with the task of ensuring the privatization of state property facilities, including mills of oil and fat and alcohol products, as well as determining the size and frequency of dividend payments by large taxpayers.

To organize the effective fulfillment of the tasks set at the meeting, the first deputy hokims of the regions need to undertake constant interaction with financial, tax, customs authorities, banks and other organizations of the economic complex to deliver decent conditions for entrepreneurs and increase budget revenues.

At the videoconference session, one more important issue was considered in detail – the comprehensive implementation of the new Tax Code.

Last year, a working group was formed to widely explain to the population and entrepreneurs the essence and significance of tax reforms. The territorial structures of the working group have carried out targeted work on this front.

Starting from January 1 this year, more than 120 new rules entered into force in the tax system of our country. For their proper application, to ensure the rights and interests of the population, it is essential to secure universal awareness.

In this respect, the President pointed out the necessity for arranging training courses for hokims of regions, districts and towns, as well as staff of the economic complex and entrepreneurs.

Only a complete understanding of the Code will ensure its high-quality realization. In addition, to explain the rules stipulated by the document to the general public, it is important to conduct roundtable discussions, seminars, and other awareness-raising events everywhere. Instructions were outlined to develop a media plan to cover this topic in mass media and during public awareness events in the first quarter of this year.

The new Code also places many tasks on tax authorities. President Shavkat Mirziyoyev emphasized the necessity of stirring up the knowledge and qualifications of workers in the field along with securing a fundamental change in their attitude to entrepreneurship.

The State Tax Committee, the Ministry of Justice, the Chamber of Commerce and Industry and the Business Ombudsman have been ordered to develop a new procedure for conducting tax audits taking into account the opinions of entrepreneurs and international experience.

The meeting participants raised the issue of funding construction works. It is inadmissible, it was noted, to start the construction and to assign funds for this in the absence of specific sources of financing and design estimates.

Hokims, executives of spheres and industries presented reports on the fulfillment of forecast indicators and the promotion of entrepreneurship.