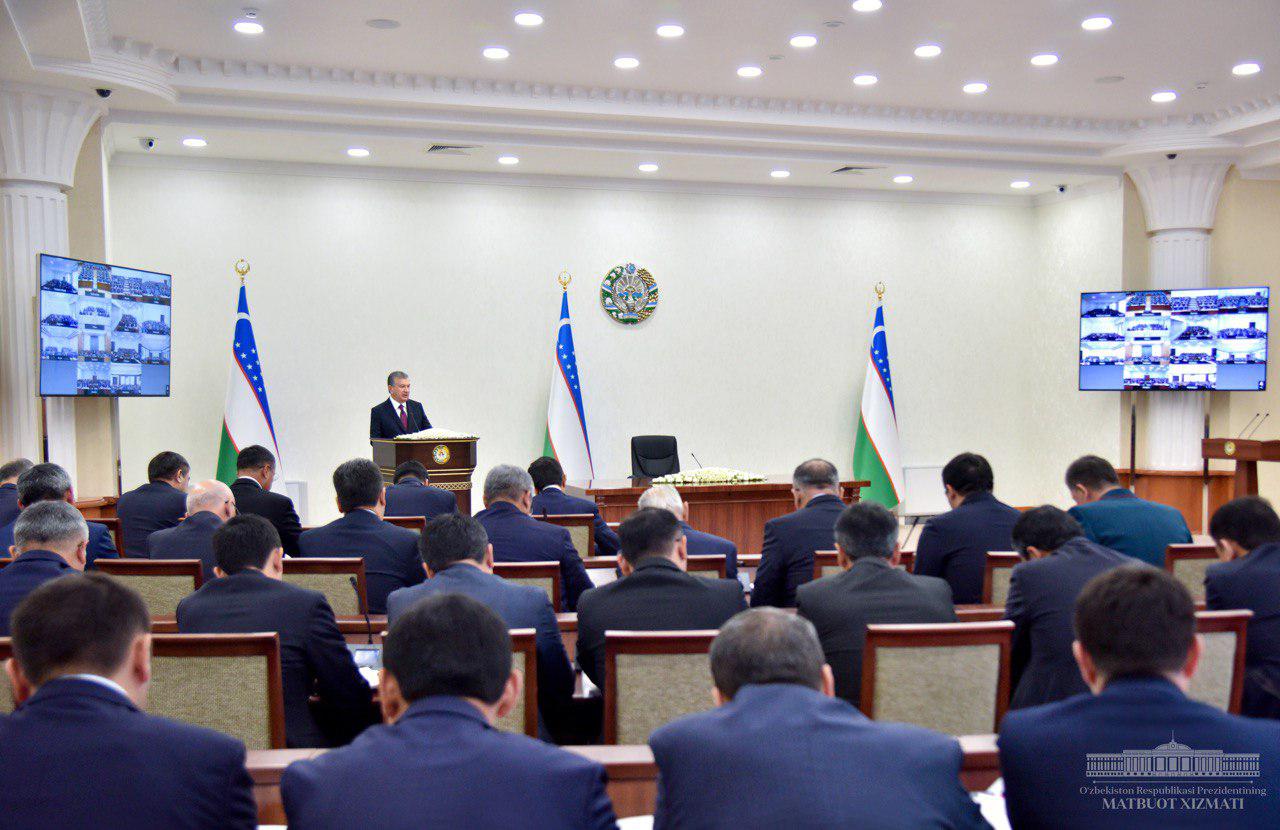 President of the Republic of Uzbekistan Shavkat Mirziyoyev held a videoconference session on November 7 to discuss ways to meet the forecast parameters of state budget revenues, effectiveness of measures to spot and harness new opportunities for the development of entrepreneurship and small business, as well as urgent tasks on these fronts.

Currently, entrepreneurs, medium and small businesses constitute the pillar of sustainable economic development across the world. In advanced nations, these entities exceed 90 percent of the total number of enterprises and provide jobs for more than 50 percent of the working population. In Uzbekistan, the figure was 76.3 percent at the end of 2018.

Small business makes a significant input into the gross domestic product.
Entrepreneurship development is one of the key priorities of government policy in our country. As President Shavkat Mirziyoyev noted once, only through active enterprise, tireless work and resolve can we secure progress and prosperity.

Owing to fundamental reforms to support entrepreneurs and improve the business environment, Uzbekistan has risen by seven positions to rank 69th in the World Bank’s Doing Business 2020 report and is included in the list of top 20 most reforming states. For the first time, the country came eighth in the global rating in terms of convenience in launching new enterprise.
Thanks to the opportunities delivered, 91 thousand new business entities have been set up over the past ten months of this year, which is twice as much as in 2018.

Nonetheless, much remains to be done for the advancement of free enterprise.

The drawbacks indicated in the Doing Business 2020 report should be addressed, including those concerning the convenience of obtaining land and building permits and property registration.
In this regard, as the President noted at today’s videoconference meeting, there is a need to provide land to entrepreneurs through online auction and to have government agencies responsible for registering property exchange data among themselves in electronic format. It was proposed to improve the state registration of property rights with an eye to international practice.

Shavkat Mirziyoyev insisted that hokims spend half of their working time on promoting the establishment of new small businesses, identify problems entrepreneurs face and provide practical assistance in addressing them. The head of state pointed to the indifferent and irresponsible attitude of some executives to these issues.

Quite telling in this respect is the analysis of 26 thousand appeals received by the Reception Offices of the Prime Minister of the Republic of Uzbekistan for the Consideration of Entrepreneur Appeals. Almost half of these could have been resolved directly at the district level, but the inaction of those responsible in the lower levels forced citizens to apply to higher offices.

Most of the cases in this regard were recorded in Samarkand, Tashkent, Khorezm, Andijan, Jizzakh and Kashkadarya regions.

To this end, the hokims of all regions and districts have been instructed to make a public appeal to entrepreneurs within two days, with personal guarantees that entrepreneurs shall not be hindered in any way, and that every local official shall closely cooperate with them and deal with issues they face.

The appeal by hokims aims to convey to the people the idea that everything will be mobilized to assist businesspeople. The plea should be announced in the media, social networks, posted on banners in crowded places. The appeal shall come with phone numbers of hokims, heads of sectors and responsible departments.

In addition, territorial working groups need to travel to places, organize work correctly and address the problems faced by entrepreneurs.

As you may know, the Khalq Bank, Microcreditbank and Agrobank were assigned with financing state-backed entrepreneurship development programs, and sufficient resources were allocated for these purposes.

At the meeting, the managers of these financial organizations and chiefs of territorial workgroups reported on measures taken to search for and tap new reserves to spur up business.

The President pointed to the weak interaction among the Agency for Small Business and Entrepreneurship Development, the Reception Offices of the Prime Minister for the Consideration of Entrepreneur Appeals, the Chamber of Commerce and Industry, the Business Ombudsman, commercial banks and other authorized agencies.

All issues hampering the advancement of small business, Shavkat Mirziyoyev said, should be addressed in close cooperation among hokimiyats, the Agency for Small Business and Entrepreneurship Development, the Chamber of Commerce and Industry, the Entrepreneurship Support Fund and banks.

The head of state insisted that potent impetus be afforded to the efforts undertaken un regions to create new production capacities and establish a system for the provision of services, with the participation of entrepreneurs.

Today, manufacturing volumes in 49 districts and the services sector in 63 districts of the country remain at a very low level. This indicates that their potential, land, raw materials and labor resources are utilized not to the full.

Therefore, permanent working groups for industrial development and promotion of services on the ground were set up under the auspices of the Ministry of Economy and Industry and assigned to certain sectors.

These institutions were entrusted with exploring the potential of each district and town, devising a 2020 program for creating new capacities and developing infrastructure and services. When implementing the program, it is important to put up for sale almost 1.5 thousand facilities of state ownership and with a state share, as well as restore the activity of 70 thousand entrepreneurs.

The President outlined tasks to further improve the country’s ranking in the Doing Business report next year, particularly with regard to simplifying the system for issuing permits and certificates.

In the sustainable development of the country and stable support for social spheres, instrumental are revenues to the state budget.

To this end, at the videoconference meeting, the head of our state instructed the Tax Committee to introduce a new system in November-December for chock-full collection of taxes in a number of districts where tax revenues scarcely correspond to their potential.

As it was reported earlier, a new version of the Tax Code has been elaborated in cooperation with the International Monetary Fund, the World Bank, foreign and national experts. From October 1 this year, the value-added tax rate was reduced from 20 to 15 percent.

The next phase in the tax policy reform is improvement in the tax administering system.

In this respect, Shavkat Mirziyoyev stressed the need to take measures, using latest methods and information technology, to combat “shadow” activities and tax evasion. For all spheres, “roadmaps” are to be worked out to drastically cut the “shadow economy”.

In addition, the commissioning of 145 new large enterprises due to be launched this year should be under oversight to bring additional revenues to the national budget.

In ensuring the sustainability of the budget, important role is played by payments for public services provided to the population and corporate bodies.

As we reported last week, starting from the year 2020, the procedure for the formation of local budgets is going to radically change, whereas the regions are scheduled to gain independence in decision-making on expenditures. In this regard, henceforth, hokimiyats should create more small business and private entrepreneurship entities in order to increase local budget revenues and independently collect taxes. This will strengthen their responsibility.

The President raised another topical issue. In accordance with the 14 October 2019 resolution of the Cabinet of Ministers of the Republic of Uzbekistan, market mechanisms were introduced into the grain, flour and bread industry.

Since October 15, wheat prices have been liberalized, and in order to support socially vulnerable segments of the population, each recipient of benefits is paid monthly compensation in the amount of 50 thousand soums.

Sufficient reserves have been created to guarantee the production and supply of loaf bread (bukhanka); the monthly volume of flour production has increased from 122 thousand to 142 thousand tons. Currently, 1 kilogram of flour in Tashkent is sold on the stock exchange for 2,300-2,400 soums, and one loaf bread is sold for 1,500-1,700 soums in retail.

The meeting participants indicated that the price of bread remains high in some regions.

In this regard, the hokims of all regions, districts and towns have been instructed to learn the Tashkent city experience, on a daily basis analyze all processes from the sale of flour on the exchange to the sale of bread in retail, and take measures to fully meet the population’s need for bread.

The officials were urged to make every effort to reduce the cost of local bread production, to timely and fully pay compensation to socially vulnerable groups of citizens. In addition, the President underscored the need for creating – in mountainous and remote settlements – the stocks of flour and other food products for the winter season.

On the issues discussed at the videoconference meeting, hokims and other senior executives presented reports and proposals.