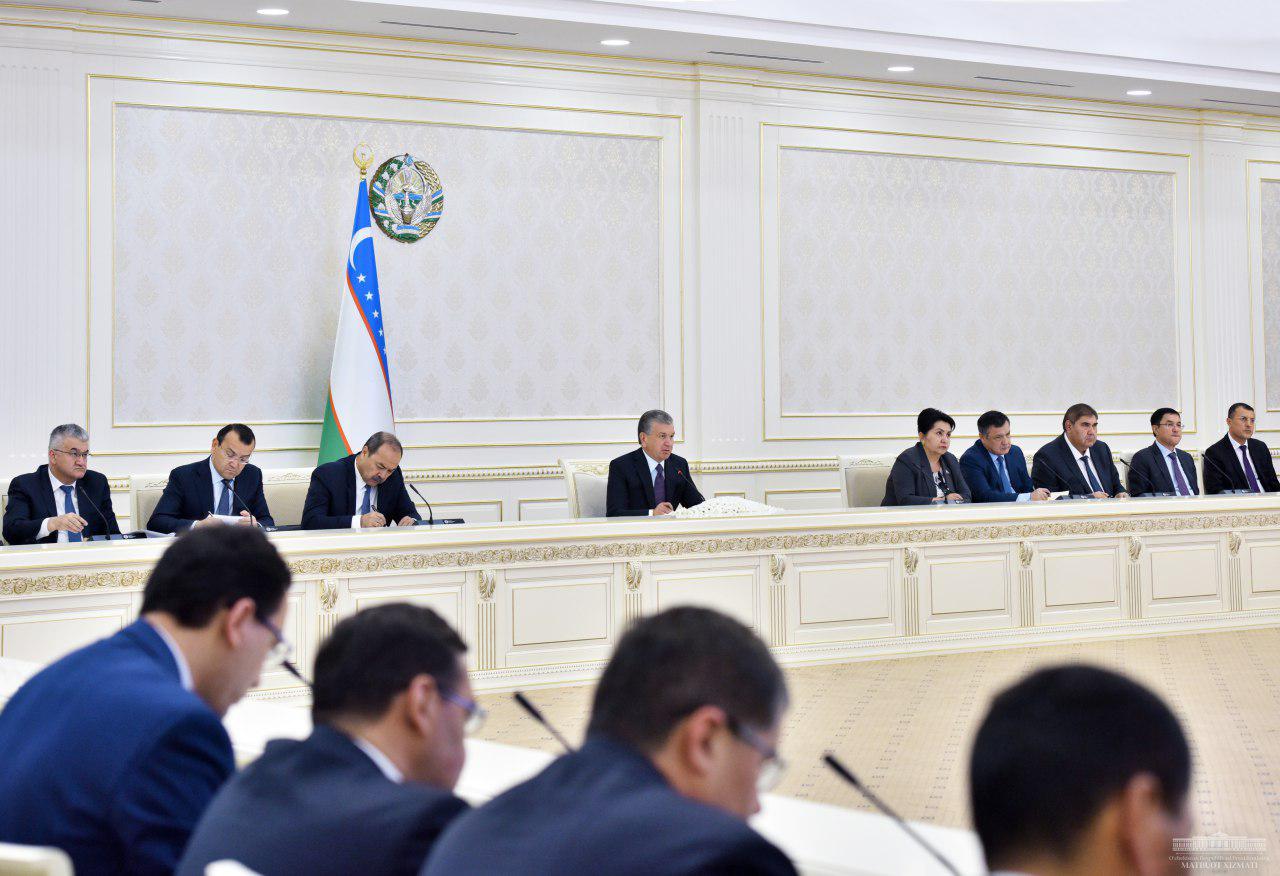 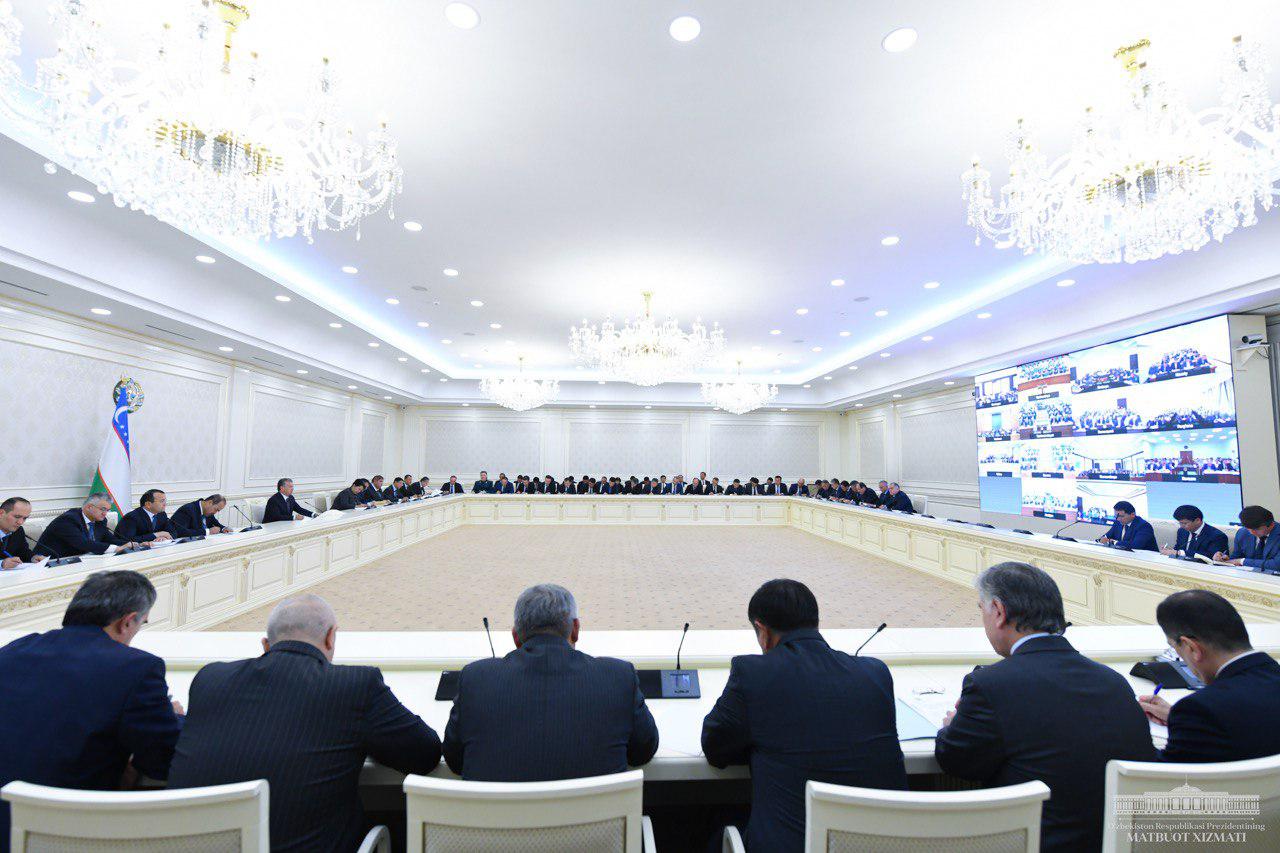 On September 17, President of the Republic of Uzbekistan Shavkat Mirziyoyev chaired a videoconference meeting on the accelerated development of industry and expansion of the scale of production localization.

As a result of active investment policy, liberalization of foreign trade and foreign exchange operations, healthy competition and a real market economy are taking shape in Uzbekistan.

The meeting participants discussed industrial development with an eye to modern requirements, the ways to boost competitiveness and expand the range of goods produced.

“We must pursue an industrial policy aimed at the production of export-oriented and import-substituting goods, at the formation of high added value. The enhancement of localization and the accelerated expansion of its scale, effectively using the available raw materials and opportunities, should be the cornerstone of this industrial policy,” the head of state noted.

The presidential resolution signed August 24 of the current year envisioned the introduction of a new system of production localization and acceleration of industrial cooperative ties. At today’s meeting thus the officials were instructed to ensure the effective functioning of that system. The President pointed out the most important areas for the expansion of cooperation.

During the analysis of production localization in industries and large enterprises, as well as the enhancement of industrial cooperation, it was found that over the past period of this year, as part of new projects, localized goods produced were worth only 1 billion US dollars. The joint venture Uzmakhsusmontazhqurilish, the association Uzyoghmoysanoat, the joint stock company Uzbekiston Milliy Elektr Tarmoqlari and other enterprises were criticized for their poor work on this front.

The ongoing work on the development of new types of finished products, components, crudes and materials was analyzed in accordance with the 1 May 2019 resolution of the President on measures for the further development of industrial cooperation and expansion of production of goods in demand.

The Cabinet of Ministers and the Ministry of Economy and Industry were instructed to take practical measures to promote industrial cooperation, launch the electronic interaction portal as soon as possible, and expand the scope of electronic conclusion of contracts for the delivery of industrial products.

The meeting participants thoroughly discussed issues of sharp expansion and deepening of production localization in the regions.

This year, a double increase has been recorded in regional imports compared with industries. This clearly indicates the great demand in the regions for a significant increase in production.

For example, working groups composed of representatives of the sphere recently visited Angren, Navoi, Namangan and Chirchik, where they formed 38, 13, 29, and 18 new localization projects, respectively.

The need was noted for the elaboration of likewise localization programs for each region.

Broad opportunities in this regard are available with small industrial zones (SIZ) offering land plots, buildings and ready infrastructure. But in the 156 SIZs in the country, only 13 percent of projects focus on the production of localized goods. 80 towns and districts lack a single SIZ.

Responsible officials were given instructions to increase the number of projects for the production of import-substituting goods in SIZs and organize such zones in those 80 cities and districts lacking such venues.

The need for efficient operation of imported technological equipment was emphasized. Many cases of downtime of equipment imported from abroad for foreign currency have been identified.

The reason for this was the obstacles faced by entrepreneurs in obtaining land, building permits, connecting to communications and solving other issues.

The head of state instructed to expedite the solution of the problems of entrepreneurs who purchased equipment, to assist in the launch of the planned enterprises. The Business Ombudsman was recommended to coordinate the process of commissioning of imported equipment at the district, town, regional and national levels.

Particular attention was paid to the timely realization of major projects designed to become flagships in the localization of production.

In particular, projects for the annual production of 100 thousand tons of polyvinyl chloride on the basis of Navoiazot, 500 thousand tons of metal at the Tashkent Metallurgical Plant, 744 thousand tons of diesel fuel in the Shurtan Gas Chemical Complex, a cluster of household appliances at the Tashkent Mechanical Plant, glass at enterprises Quartz, Sirdaryo Glass and Zarafshon Oina will make it possible to manufacture localized goods worth $ 2.5 billion a year. In addition, other industries will arise around them and new jobs will be created.

The Prime Minister and the chairman of the Accounts Chamber were urged to ensure the timely commissioning of these major projects.

When considering the issue of localization support, it was noted that it is essential to effectively use the system of guaranteeing and partial compensation of interest on loans from the State Fund for Supporting the Development of Entrepreneurship under the Cabinet of Ministers.

The possibility was also indicated of assistance to such projects in the form of payment of customs fees by installments up to 120 days, simplified certification and standardization of finished products of enterprises localizing production.

Priority tasks were identified for expanding and stimulating the participation of local enterprises in public procurement, improving the efficiency of tariff management of foreign trade.

Officials of sectors and regions presented their reports on issues discussed at the meeting.