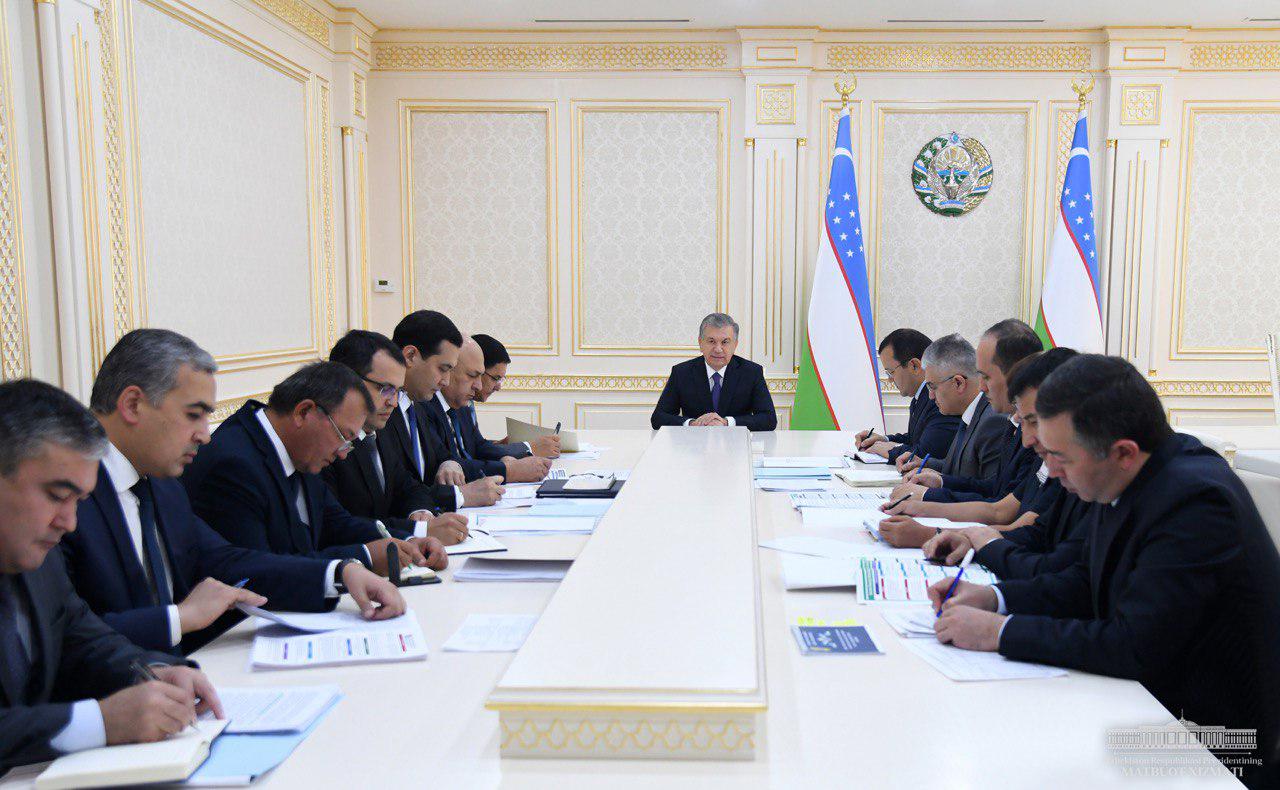 President of the Republic of Uzbekistan Shavkat Mirziyoyev has held a meeting to discuss priority tasks of agricultural development in 2020-2030.

Uzbekistan wields tremendous potential in the agricultural sector. Success in resolving many socio-economic issues – from abundance in the markets and on the table at home through to additional incomes from exports – depends on the development of this industry.

Yet for a long time this area had not been afforded due attention. There was no market approach, nor was attitude to land as a source of income, as material interest. The sphere lacked funds raised and scientific innovation. As a result, the land was “worn out”, and soil fertility decreased. There was no product processing system, nor any value chain.

In recent years, a number of measures have been undertaken to reform the sector and introduce market mechanisms. As a result of almost threefold increase in government procurement prices, the interestedness of agricultural producers has seen a respective boost. Cotton and grain cultivation became a real source of profit.

In order to introduce new technologies and innovations, augment labor productivity and raise the wages of workers in the sphere, 76 cotton-textile clusters have been organized.

This is the first stage of reforms in this area.

The President sets the task to bring the transformation in the industry to a new level, not living by today’s issues only, but also thinking over actions with an eye to the longer term goals. To this end, an agricultural development strategy for 2020-2030 is being elaborated, designed to make the sector the main point of growth, a driver of economic advancement. Thousands of new jobs will be created, people’s incomes will increase.

The meeting participants identified important tasks for the implementation of the strategy being devised.

It was emphasized that land owners will invest in land, strive to increase fertility and productivity only when they are fully confident in its future. In this regard, the President noted the need for a complete update of the legislation to ensure transparency of the land allocation system, the inviolability of land, guaranteed protection of land rights, and the introduction of the concept of responsible attitude to land into legal culture. This will not only provide for employment and exports, but also additional revenues to the national budget.

As it was underlined, it is essential, first of all, to keep accurate records of agricultural lands and improve their use. In this regard, the State Committee for Land Register and Cadastre was instructed to complete land stock taking works in all regions of the country by late 2021 and create an integrated electronic database for keeping its records.

The rational use of water resources is also extremely important. As the analysis shows, billions of cubic meters of water are sent to irrigate crops in our country, but only 60 percent reach the fields, while the rest is lost in irrigation systems and in the process itself.

As the World Resources Institute forecasts, by 2040 Uzbekistan may be among 33 nations of the world with acute shortage of water.

In this regard, the head of our state placed special emphasis on this issue and stressed the need to increase efficiency and record water use, introduce water-saving technologies on 200 thousand hectares of land each year. The President insisted that these tasks be reflected in the strategy being developed.

During the discussion of government support for agriculture and improvement of the public procurement system, it was pointed out that it is necessary to direct the bulk of budgetary funds to bolster the fertility of lands, introduce water-saving technologies and develop science.

Particular significance was attached to issues of shoring up the export potential of the sphere and the volume of procurement of value-added products.

The meeting participants analyzed the world experience on this matter. For example, in Turkey, 2 thousand dollars can be raised from the cultivation of 1 hectare of land, 8 thousand dollars in Egypt, and 12 thousand in Israel. In Uzbekistan, this figure does not exceed 300 dollars. Our goods barely withstand competition in the foreign market, as they are produced under diverse standards.

In 2018, a total of 2.3 billion dollars worth of agricultural products were exported. As a result of the implementation of tasks included in the new strategy, it is expected to bring this indicator to $ 20 billion by 2030.

At the meeting, responsible officials were instructed to introduce a product certification system in accordance with standards of the European Union, East Asian nations and the Arab world. Priority should be given to the selection of fruit tree varieties.

Private land represents a large reserve for agriculture, which requires widespread realization of local logistics and cooperation based on the principle of “one mahalla – one product”, unification of small producers into cooperatives, and ensuring uniformity of production.

Shortcomings exist in the services sector. Due to the lack of competition, there is a high cost of services, manufacturers have no choice.

Therefore, the need for expanding the range of services in the field of delivery of mineral fertilizers, equipment and others on the basis of public-private partnerships, the organization of private enterprises is indicated as essential.

The President urged to complete the works, by the end of 2020, on space-based detection started this year, which will make it possible to have a reliable assessment of the real state of land and crops. As a result, this system will provide comprehensive information about the vegetative process, reclamation state, level of mineralization and soil moisture, which will contribute to an increase in productivity by 25-30 percent. All this will be beneficial not only to the government, but also to the farmers themselves. With access to the system both farmers and exporters will be able to monitor where and what crops are grown, which will help to build business plans with confidence and assess market conditions.

Corresponding officials were entrusted with radically improving the system of maintaining agricultural statistics, in particular, introducing digital technologies in all processes from the placement of crops to the sale of finished products.

To effectively organize the implementation of these tasks what is needed is, first of all, qualified specialists.

More than 3 thousand young people annually graduate from seven specialized universities, but in the regions there are not enough personnel. There is no integration of science, education and production; modern educational methods have not been introduced.

Only 0.1 percent of budget funds are allocated for the development of agricultural science, while in developed countries this figure is 2-3 percent.

The number of scientific schools of academicians has decreased from 50 to 17, and such schools for vegetable, grain, plant growing are completely absent.

Laboratory equipment at the institutes of crop production, vegetable and melon crops, and potato growing has not been repaired over the last 70 years. Measures to commercialize scientific developments remain ineffective.

For example, the export of cherries in many countries begins in June. But if we create in Uzbekistan a variety that would be ripen in early May, the revenues from the supply of such cherries could double.

Therefore, research institutions in the field of agriculture should focus on the creation of early ripe varieties. Achievements of science should also be introduced into animal husbandry, and livestock breeds corresponding to our climatic conditions should be bred.

The President pointed out the need to discuss the strategy with the people, to thoroughly study all its aspects. The head of our state instructed to work out annual “roadmaps” for the effective implementation of the strategy, as well as to revise the structure of local agricultural departments.

Shavkat Mirziyoyev noted the necessity of introducing a completely new teaching methodology at the Tashkent State Agrarian University and the Tashkent Institute of Irrigation and Agricultural Mechanization Engineers, of arranging field workshops and seminars by the teaching staff.

In general, the new strategy will contribute to the introduction of market mechanisms in agriculture, the establishment of science-based production, which will lead to more efficient food security, a multiple increase in exports and the volume of food products per capita.

Heads of responsible government agencies reported on the impending works towards fulfillment of the tasks outlined at the meeting.