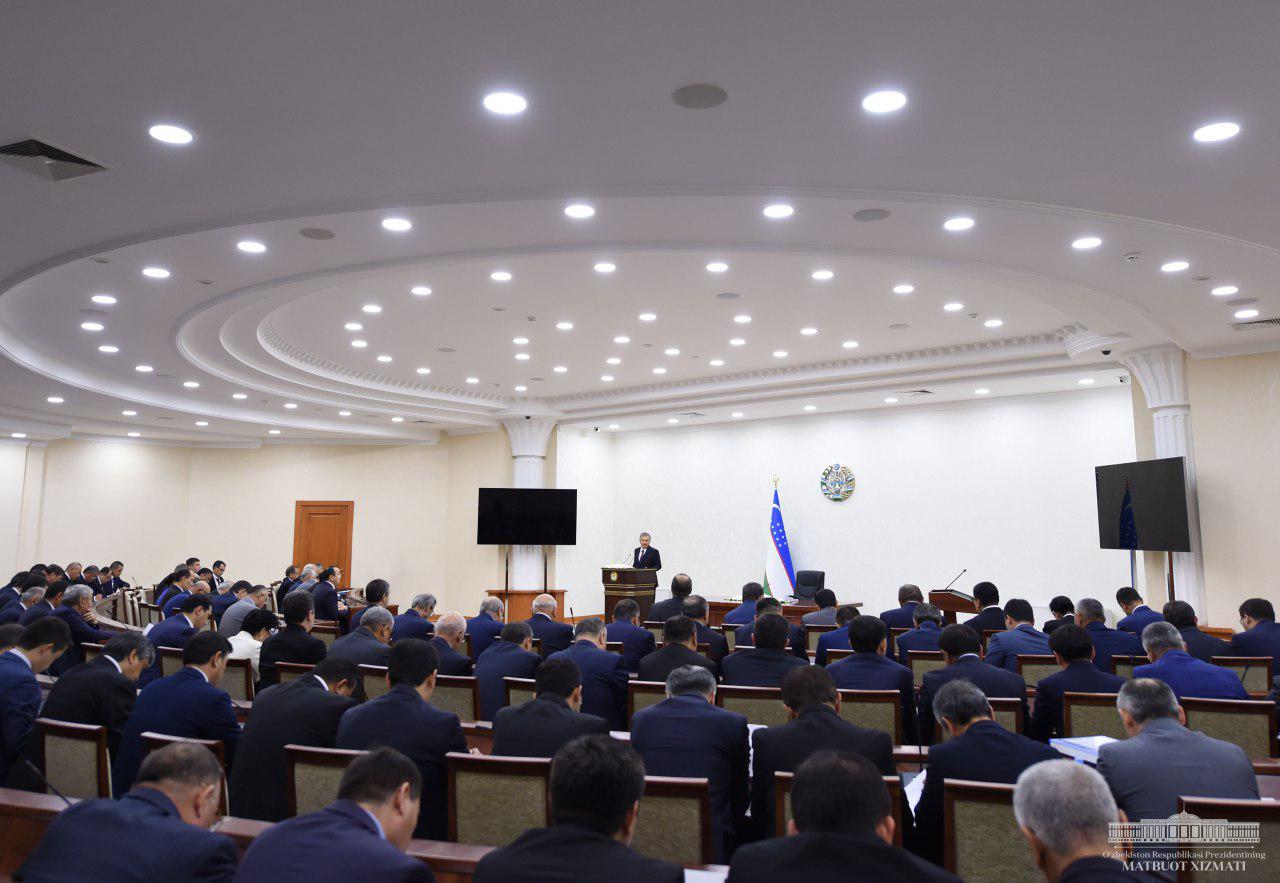 President of the Republic of Uzbekistan Shavkat Mirziyoyev chaired an expanded meeting on August 14 to discuss the outcomes of socio-economic development in the country in the first half of 2019, as well as priority tasks for securing forecast parameters for the second half of the year.

The session was attended by chairpersons of the two chambers of the Oliy Majlis, the Prime Minister and his deputies, chairman of the Zhokargy Kenes of Karakalpakstan, hokims of the regions and the city of Tashkent, the heads of ministries, other government agencies, business associations and commercial banks.

The meeting allowed to deeply analyze the measures taken to ensure macroeconomic stability, the modernization of the fuel and energy as well as the processing and agro-industrial sectors, the integrated development of regions, support for entrepreneurship, improvement of the social sphere, and elevation of the welfare of people.

It was noted that the heads of the complexes of the Cabinet of Ministers, ministries, chairpersons of committees and business associations needed to radically revise their methods of work, frequently visit regions and remote villages, and provide hokimiyats, entrepreneurs and local leaders with practical assistance in identifying and addressing pressing issues at the grassroots level.

From now on, all the heads of the complexes must, together with the ministers, travel to the regions on a quarterly basis and solve the existing problems in relevant areas, and, as a result, report to the regional councils of people’s deputies and local public figures.

The hokims of regions, in turn, following this principle of work, together with their deputies and heads of regional departments of national ministries will have to visit districts every quarter, get to the bottom of problems there, then report to the district kengashes of people’s deputies and local public figures.

The Oliy Majlis chambers and the Cabinet of Ministers were pointed to the necessity of introducing a new system providing for the participation of senior management representatives and hokims in the work at the grassroots level with subsequent hearing of their reports.

The meeting participants discussed issues of macroeconomics, structural transformation, financial and banking systems and private entrepreneurship. It was noted that in the first half of this year, gross domestic product increased by 5.8 percent and industrial production grew by 6.9 percent. The local budgets left over 2.6 trillion soums or 1.5 times more funds than in the same period last year. Budget revenues amounted to almost 51 trillion soums, or 109 percent implemented against the forecast.

Instructions were given at the meeting to ensure a balance of revenues and expenditures of the national budget, to find and mobilize reserves for additional revenues to local budgets.

The need for a radical reform of the banking system, introduction of new types of banking services and improving their quality was stressed in particular.

The head of our state paid special attention to the issue of preventing a sharp rise in prices.

In the first six months of this year, inflation amounted to 5.6 percent and did not exceed forecast indicators. Responsible persons were urged to take necessary measures to prevent inflation growth in connection with the phased implementation of market principles in tariff and price regulation.

The need was emphasized at the meeting to engage large segments of the population in entrepreneurship, provide employment and increase their income through the introduction of this new system in the field.

Boosting the role of manufacturing industry in the economy also received due consideration at the government session.

“Over the past year, the share of industry in gross domestic product has grown from 26 to 30 percent, but this still does not correspond to the scale of the reforms we started,” Shavkat Mirziyoyev stated.

The President pointed to the necessity of organizing the production of almost 100 types of consumer goods through industrial cooperation, targeted work with enterprises in order to help increase their capacities.

This year, declared as the Year of Active Investments and Social Development in our country, large-scale efforts are underway to attract and develop investments, primarily foreign direct ones.

The effectiveness of these measures is evidenced by the fact that in the first half of the year, almost 86 trillion soums of investments were disbursed, that is, 1.6 times more compared to the same period last year. In addition, indicators of the development of foreign direct investment grew 2.7 times, while funds drawn from international financial institutions multiplied 3.7 times.

It is worth noting that for the first time in Uzbekistan’s history, the share of investment in gross domestic product exceeded 38 percent. In previous years, this figure had not reached 25 percent.

The President reiterated the need for timely and high-quality fulfillment of tasks to enhance investment attraction and increase export volumes, identified at the videoconference meeting on August 12.

Systemic reforms are carried out to develop the fuel and energy industry and the basic sectors of the economy. The Ministry of Energy was established to implement integrated government policy on this front.

Shavkat Mirziyoyev insisted that the industry be promoted and developed steadily, the raw material base expanded constantly to meet the ever-growing domestic demand.

Concrete instructions were voiced to cut losses in the production and supply of electricity, to streamline the system of payments for energy resources, and reduce receivables.

The importance of ensuring the commissioning – by the end of the year – of 4 enterprises that will produce new types of chemical goods, as well as accelerating the works on 31 investment projects in the sphere, was noted.

Additional tasks were identified for the further development of the automotive industry, agricultural engineering, the electro-technical sector, for the localization of manufacturing of component parts, reduction of production costs, growth of production and export volumes.

During the reporting period, large-scale work has been undertaken in the complex development of regions, in the construction of houses, road-logistical and social infrastructure facilities. Thus, in the framework of the Obod Qishloq program, 478 villages in 159 districts acquired a fresh appearance, with drinking water, gas and electricity networks connected to them. The building and repair of 3.6 thousand kilometers of roads was completed.

The event participants considered tasks of continuing the efforts in this direction, meeting the needs of the population in housing, in improving social conditions.

The President indicated that it is essential to complete the erection of 10 thousand individual and 111 apartment buildings by the end of the year as well as the construction and reconstruction of 1.2 thousand kilometers of drinking water supply and sewage networks, and to secure special oversight over quality and costs.

During the discussion of the quality of services for the transportation of passengers and goods, responsible officials were instructed to build and repair 10 thousand kilometers of roads of national and local significance, establish joint transport and logistics enterprises for international freight traffic, shift the international airports in Bukhara, Karshi, Nukus and Termez to the open sky mode, and create the Navoi dry port.

The challenges were defined related to increasing the production of building materials, uplifting urban standards and the design process, protecting the environment.

The meeting also helped analyze the results of the development of the agricultural sector and the food industry.

Over the past three years, numerous regulatory acts and programs have been adopted aiming to secure sustainable development of the industry, increase production. Economic mechanisms have been introduced to boost the interest and incomes of farmers.

Today, 70 percent of domestic consumer products are created in this industry. More than 180 types of agricultural goods are exported to 80 countries of the world, which accounts for 20-25 percent of all export earnings. The industry employs 27 percent of the economically active population.

Measures were outlined to consistently continue this work, expand the planting of vegetable crops in the autumn months, and swell crop yields based on the climatic conditions of the regions.

Specific measures were identified for setting up grain-growing clusters, livestock, poultry and fish farming complexes, and the widespread introduction of water-saving technologies.

Particular importance is attached in our country to the development of education, healthcare, tourism, sports and sciences, consolidate support for women and youth.

In particular, concepts on the long-term development of public education and healthcare were adopted. The wages of social sphere representatives increased on average 1.5-2 times.

During the reporting period, 14 new universities were established, including 6 domestic and 8 foreign universities. Training was organized in 40 new areas of education and 41 new majors. Admission quotas grew by 20 percent compared to last year.

As a result of measures taken to accelerate the development of tourism in the first six months of 2019, more than 3 million foreign tourists visited our country, which is 30 percent more than last year. Also, 28 percent more tourism services were exported than in the same period of 2018.

100 billion soums were allocated for the promotion of women’s entrepreneurship. During the first half of the year, 41 percent of these funds were spent, women implemented 1,755 projects and created 2,240 jobs.

The meeting participants identified additional tasks for the further development of the social sphere, for the expansion of coverage and improvement of the quality of services.

“Systemic work and discipline in all government departments and enterprises, unreserved implementation of decisions made, comprehensive support and practical assistance to entrepreneurs should and will be the main factor in the effectiveness of our reforms,” the President pointed out.

The Prime Minister and his deputies, heads of ministries and other government agencies, business associations, chiefs of regions presented reports on the effectiveness of their work, the expected results for the first 9 months and the entire year, and progress in fulfilling priority tasks. Following the meeting, appropriate measures were identified.