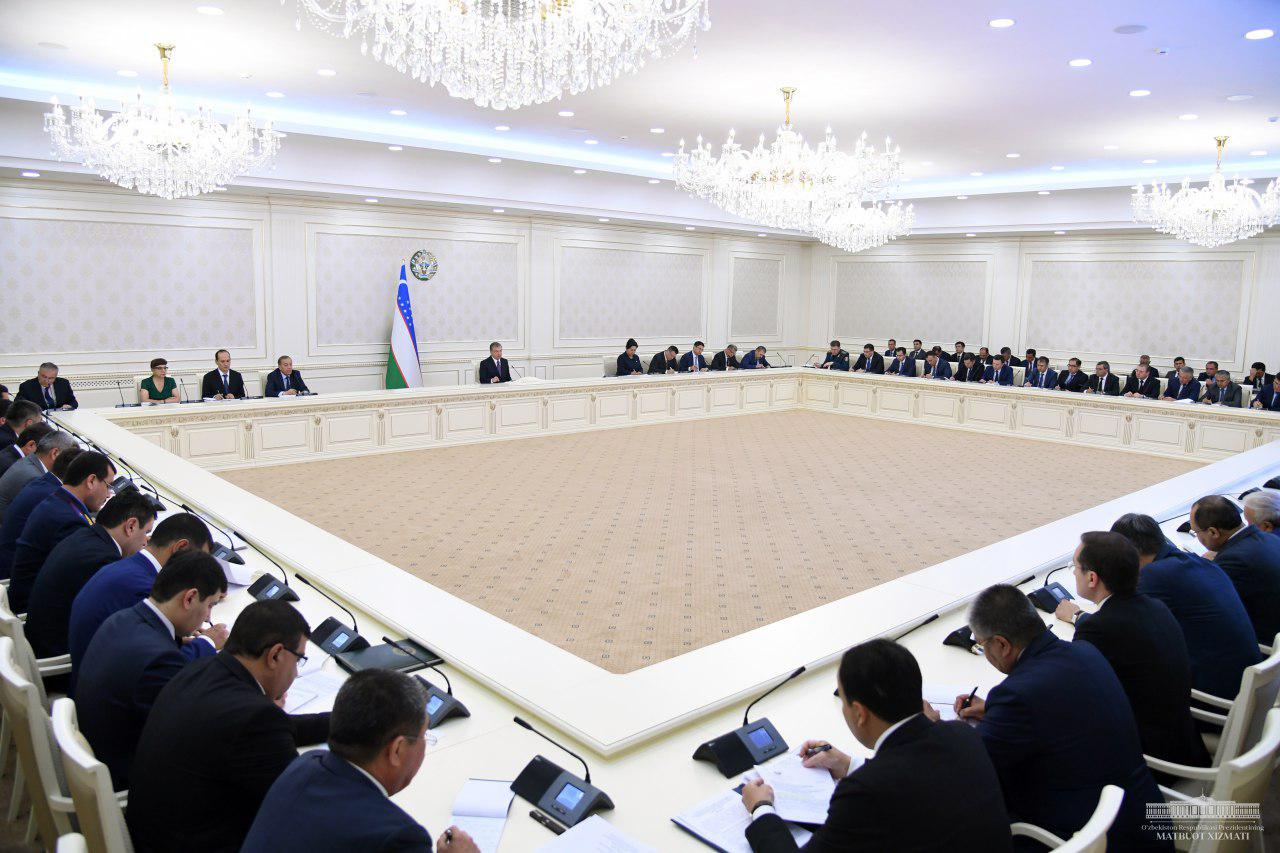 On July 5, President of the Republic of Uzbekistan Shavkat Mirziyoyev held a videoconference meeting to analyze the effectiveness of revenues to the national budget in the first half of this year and identify new tasks in this area.

Almost a year ago, on 29 June 2018, a presidential decree was adopted to define the concept of improving the tax policy of the Republic of Uzbekistan.

As a result of the implementation of this concept, in the first half of this year, the national budget received 39 trillion 118 billion soums or 1.6 times more funds than in the same period last year.

Owing to the over-fulfillment of the forecast by 8 percent, an additional 2.8 trillion soums were left at the local hokimiyats’disposal. Thanks to a significant cut in personal income tax rates and social benefits, over 570 thousand jobs have been legalized.

However, there are still some local problems related to the systemic implementation of new tax reforms, the increase in tax revenues and tax collection.

For example, slowness is allowed in expanding the taxable base by organizing new enterprises on the basis of unused facilities and land plots. In some regions, the forecast is secured by revenues from large enterprises and tax prepayment practices.

The head of state noted that due to these and other shortcomings, the opportunity to secure multibillion-dollar revenues to the budget was missed, and he gave the heads of relevant ministries and regions directives to remedy the drawbacks and to strictly control the execution of the tasks set.

Our country has introduced a moratorium on tax audits for a period up to 1 January 2020. By the end of the year, the State Tax Committee was instructed to create an electronic program with international financial institutions with the ability to assess the risks of non-payable taxes. On June 27 this year, President of the Republic of Uzbekistan signed a decree outlining measures to
further streamline the provision of tax and customs benefits. The steps defined therein constitute the second important phase of tax reforms.

In accordance with the decree, from 1 October 2019, current value-added tax exemptions will be abolished. The principal purpose sought from this measure is to deliver equal conditions for all entrepreneurs and bolster healthy competition.

At the meeting, the President ordered to intensify the activities of the working group headed by the Prime Minister, formed to extensively explain the essence and significance of these changes to the public and entrepreneurs. It is essential, it was stressed, to establish targeted work with business entities and farming enterprises that switch to paying VAT and provide them with practical assistance in keeping accounts.

Shavkat Mirziyoyev also insisted that, along with demanding from businesspeople to fulfill tax obligations, their interests be protected.

For example, entrepreneurs are currently purchasing raw materials, whose value already includes value added tax. The amount of VAT paid for commodities can be deducted only after the goods are manufactured and sold. Before that, the businesspeople cannot temporarily use their working capital.

Therefore, President Shavkat Mirziyoyev instructed those in charge to introduce a mechanism for simultaneously accounting for VAT and returning it to the taxpayer.
Another important issue was considered at the videoconference meeting, namely, optimization of tariffs for energy resources.

Over the past two years, a great deal of work has been undertaken on the uninterrupted supply of the population as well as social and industrial facilities with electricity and natural gas.

Further improvement in this area requires upgrading networks, introducing energy-saving technologies and honing the costs. Without optimization of tariffs, it is impossible to achieve improvement in the financial condition of industries and the active attraction of investments.

In this regard, taking into account the opinions of specialists and the wider public, proposals have been developed for changing the tariffs for the population to values ​​close to inflation rates. At the same time, it is planned to increase the minimum wage so that the tariff reform can be carried out without serious consequences.

It was underscored at the meeting that the information on the proposed reforms to streamline tariffs should be fully communicated to the public. Tasks have been defined to clarify the nature and significance of changes in tariffs in each mahalla with the participation of members of the republican working group for the propaganda of tax reforms, as well as deputies of local Kengashes (Councils), responsible officials of economic and municipal organizations.