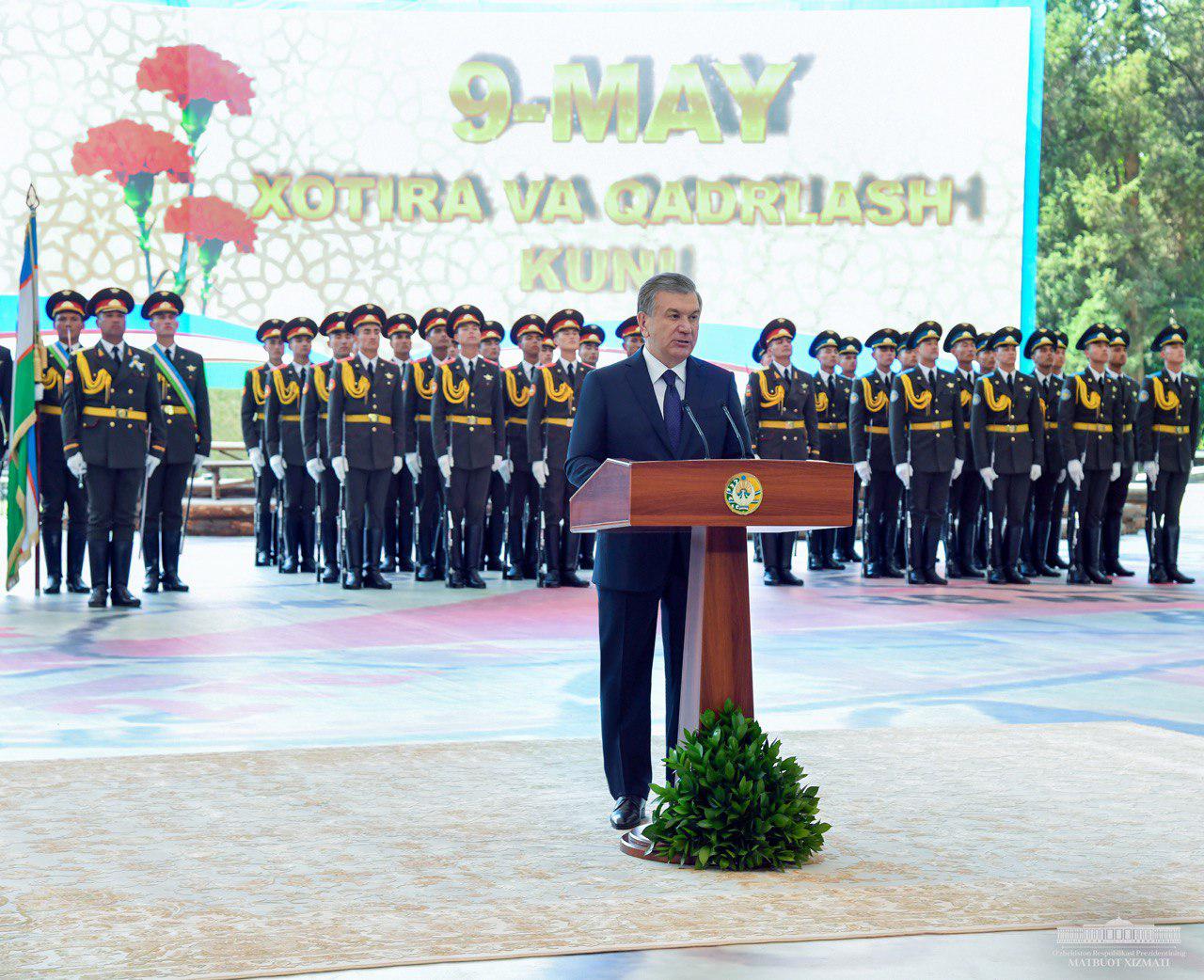 Allow me to sincerely congratulate you and the entire multiethnic people of Uzbekistan on the 74th anniversary of the Victory in the Second World War.

Today, first and foremost we bow our heads by the memory of our fathers and grandfathers who made an enormous contribution to the Great Victory, and who did not happen to see these bright days.

With a sense of pride in the immortal feat of our people, respect and admiration for all our veterans, we express our deep gratitude for the courage and bravery shown on the battlefield and on the labor front.

Honor and glory to you, dear veterans!

Eternal memory to those outstanding people who gave their lives for the Great Victory!

To be sure, no matter how many decades pass, the value and significance of this Victory will only grow.

Thousands of our compatriots, together with representatives of other nations, manifested genuine heroism in that terrible war. For 74 years, their remarkable accomplishment has been a school of courage for all of us, a source of pride, and it will always be so!

Indeed, the 9th of May, Victory Day, is a holiday achieved by our people with great anguish, a day of immense glory for the sons of our Motherland, who went through thorny roads of war and defeated fascism at the unthinkable cost of sacrifice.

This is our common magnificent history that will by no means be forgotten; this is our resplendent spiritual wealth that no one can take from us.

This revered history gives us strength and energy, inspires for new achievements. It urges us to value and preserve peace, to live in friendship and harmony with all nations, to build a common future together.

During these festive and at the same time mournful days, we recall time and again the years of war in order to learn lessons from that past.

More than 1.5 million citizens from Uzbekistan took part in the most devastating war in human history. More than half a million of them fell, almost 133 thousand went missing, while over 60 thousand returned from the war with disabilities.

In excess of 120 thousand soldiers and officers from Uzbekistan were awarded orders and medals for their heroism on the battlefield. It is worth noting in particular that 280 of them were granted the title of Hero of the Soviet Union, 82 were awarded the Orders of Glory of all three degrees.

In those fiery years, all the people of Uzbekistan, from young to old, lived and worked tirelessly under the single motto “Everything is for the frontline, everything is for victory!” The republic turned into a reliable rear provision platform for the hostilities.

During the war years, Uzbekistan delivered over 2,000 aircraft, military-sanitary trains, a huge amount of ammunition, field kitchens, tents, food, clothing and other products.

The people of our land received about 1 million persons from the frontline regions, warmed them up with their kindness, and sometimes shared the last piece of bread. With special affection and love did our compatriots welcome the 200 thousand evacuated children who lost their relatives and friends, and took many of them to their families to look after with the words “You are not an orphan!”

Surely, these figures are hardly mere statistics. They urge us never to forget about the consequences of that dreadful war, to appreciate the current peaceful and prosperous life, to be vigilant, and nurture the young people in the spirit of love and devotion to the native land.

As you know, special attention and care for veterans of the Second World War and the labor front constitute a priority government policy in Uzbekistan.

We are indebted to them for the present peaceful and free life, for the happiness and wellbeing of our children. It is a sacred duty for every one of us, and first of all the officials of all levels, to care for and honor these people dear to us, to create all the conditions for their healthy, happy and decent life.

We will continue with the comprehensive efforts on this front by mobilizing all the energy and capacities of our state and society.

Next year, the 75th anniversary of the Great Victory is going to be widely celebrated internationally. Together with other CIS countries, we have been undertaking a great deal of preparations to commemorate this significant date with dignity and at a high organizational level.

Currently, works are in progress to write and publish a book album with important historical facts and tribute to the contribution of the people of Uzbekistan to the Victory.

I would also like to inform you that in one of the most picturesque sites in Tashkent, a gorgeous Victory Park will be built for the anniversary date. Design and construction works have already begun. The square will come to be another manifestation of our admiration for our people’s feat in that cruel war.

And, indeed, the park will house a Museum of Glory erected on a modern architectural design. In building this splendid memorial complex, including the museum exposition, we will rely on the proposals and recommendations of our respected veterans, history scholars, the creative intelligentsia and the general public.

In this regard, I believe we should study more profoundly the thorny life path of our compatriots who made a worthy input into the Great Victory, their audacity and heroism, and conduct new academic research on this subject, create glowing artistic works, films, performances. Young people should realize that thanks to those very individuals have we been living in peace and tranquility for almost 75 years, not knowing what war is.

Unfortunate as it is, participants of the bloody battles are fewer among us with every coming day. So are those who knew them and knew of them. Such people, their every word has a special value for us.

We need to collect all the eyewitness accounts of the war and data about the heroes and bring them to the public. It would be advisable to organize permanent expositions entitled “Heroes of our Mahalla”, “Defenders of the Motherland” across our country, in educational institutions.

Meanwhile, factual data should reflect there not only the participants of the Second World War, but also the soldiers and officers who showed bravery in defending our peaceful and prosperous life during the years of independence.

This is how we will be able to convey our great history to our descendants, to pass the celebrated traditions of courage and valor on to them. Should we not start this work today, it may be too late tomorrow.

Taking this opportunity, I urge all of you to study history more deeply, more vigorously. Only by drawing conclusions from the lessons of history can one effectively counter the diverse challenges and threats of the contemporary world. Those people will be able to objectively and fairly assess both the current situation and future processes. In our difficult, rapidly changing time, this is the most critical prerequisite for securing peace, stability and progress.

When we speak of the heroic deeds of the people during the war years, we first and foremost conceive of the image of the Mother. After all, it was she who brought up the courageous and fearless sons who consider the defense of the native land and the people a matter of honor, and it was she who experienced most the bitterness and pain of the brutal war.

Our nation boasts such resolute and patient women with robust will. During the combat years, they came to be the personification of the sacred image of the Motherland.

I would like to cite one example. Prior to the war, Kholmat and Zulfiya Zakirovs used to live in Khanabad village of the Zangiata district, Tashkent region. Following the death of her husband, Zulfiya had to bring up five sons and a daughter all by herself.

To be sure, not everyone is able to endure such a cruel blow of fate. After all, for a mother, there is no wound and pain worse than the death of her children, let alone of all of them.

Against all odds, Zulfiya Zakirova proved able to withstand that incredible test. What an unshakable, iron will should have a person who has faced such agonizing suffering for five times, and every time, finding strength in herself, to decisively rise to her feet in order to live on, if only for the kids of her sons!

Taking care of the lives of her daughters-in-law, aunt Zulfiya kept telling them: “You can arrange your personal lives, I do not mind”. And those women, following the example of Zulfiya herself, stayed beside her, supported her, remained faithful to their dead spouses and family.

I think this is a manifestation of the genuine courage and resilience of Uzbek women, the Uzbek people.

This is the very elegy to the greatest love and loyalty.

This is where young people ought to draw lessons! Facing a great deal of difficulties in life, youngsters should not lose hope, must go only ahead, and only in this way can they overcome trials. In this regard, indisputably, the breathtaking story of the Zakirovs family can become a school for fostering our younger generation.

As the popular wisdom goes, “The memory of the feat lives forever”. I am convinced that our public will support the proposal to set up a monument in honor of the humble Uzbek woman Zulfiya Zakirova, her hero sons and daughters-in-law in the Victory Park created in Tashkent, and call it “Ode to Resilience”.

The unprecedented transformation taking place in our country today and the renewal of life require from us all an even greater mobilization of our strength and energy. Our main challenge is the preservation of peace, the development of cooperation and mutually advantageous and friendly relations with all states of the near and far abroad, and above all with neighboring nations. This will continue to be one of the priorities of Uzbekistan’s foreign policy.

At the same time, we must never forget that there are still forces in the world that are striving to destroy the priceless wealth – peace, to stir up the fire of war among different peoples, to aggravate national and religious contradictions. In the fight against these destructive forces, decisive role is played by the constant vigilance and consideration, solidarity and unity of our people.

In this respect, we have embarked on extensive endeavors to further increase the combat power and potential of the Armed Forces of Uzbekistan – a reliable defender of our free and peaceful life, our independence. We are working towards strengthening the unity of the army and the people.

In the current extremely tricky and turbulent time, it is of particular importance to nurture young people in the spirit of patriotism and protect them from the effects of various ideas alien to us.

Courage and heroism, the glorious traditions of our cherished veterans, surely, will always serve as the best example for us in our successful spearheading of such vital objectives.

We greatly value your wise advice and guidance, your practical and moral support in carrying out reforms whose purpose is to deliver a decent life for our people. We appreciate your assistance and are very proud of you!

I avail myself to this opportunity to once again – on behalf of the people of Uzbekistan and on my own behalf – express deep gratitude to you for today’s free and peaceful life, for the clear skies above our Motherland.

I wish you all sound health, happiness and wellbeing, peace and prosperity for your families.

Congratulations to all of you on the Great Victory Day!