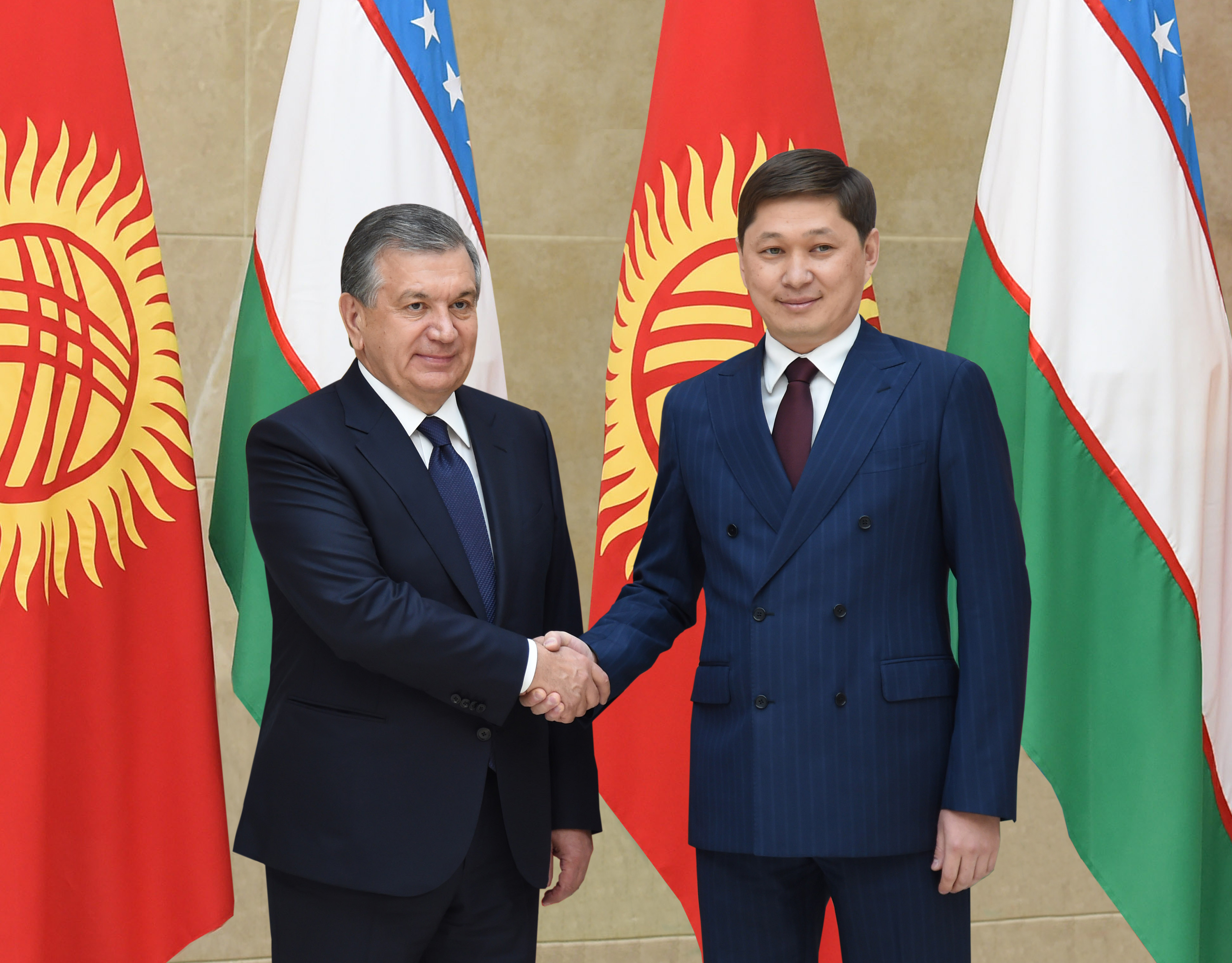 On September 5, at meeting of the President of Uzbekistan Shavkat Mirziyoyev and the President of Kyrgyzstan Almazbek Atambayev at the Ala-Archa residence, issues of expanding relations between our countries in all spheres and prospects of further cooperation were discussed.

During the dialogue, mutual interest was expressed in implementation of “Uzbekistan – Kyrgyzstan – China” railway project in a short time. It was noted that implementation of this project will contribute to the growth of domestic trade and increase the attractiveness of Central Asia as an advantageous transit link in the “East-West” direction.

The importance of creating “Uzbekistan – Kyrgyzstan – China” new automobile corridor, which will serve to expansion of mutually beneficial relations between the states and in the region as a whole to a significant extent, as well as an additional impulse to their economic development was emphasized.

Over the past period of 2017, the trade turnover between our countries has increased by 60 percent and amounted to 150 million dollars. During the negotiations, possibility of increasing this figure to 500 million dollars in the coming years was noted.

As a result of the visit, the Presidents signed the Joint Statement between the Republic of Uzbekistan and the Kyrgyz Republic and the Agreement on Uzbek-Kyrgyz state border.

Uzbek and Kyrgyz people have lived in peace and harmony since ancient times. We will direct all our capabilities and potential for creating favorable conditions for further development of bilateral relations based on close fraternal ties of our people, said the head of our state.

The agreement on cooperation in trade and economic, cultural and humanitarian spheres, signed between the cities of Andijan and Osh, is of historic importance.

The agreement on cooperation between the Chambers of Commerce and Industry of the two countries became an important step for the mutual exchange of experience of the sphere representatives. Within the framework of the visit, a group of businessmen of our country took part in the business forum held in Bishkek. They also have acquired reliable partners along with acquaintance with conditions created for the activities of business representatives in Kyrgyzstan.

Businessmen of the two states should carry out constant direct contacts without any barriers and obstacles. We will create all conditions and opportunities for their effective cooperation. The steps taken in this direction will definitely bear fruit, emphasized Shavkat Mirziyoyev.

In turn, Almazbek Atambayev noted that the state visit of the President of Uzbekistan is a historic event that opened new perspectives and horizons in friendly relations between the two states, is of great importance in solving many current issues, marked the beginning of a new era, a new stage in relations of our fraternal people.

Memorandum on inter-parliamentary cooperation was fixed by practical actions on the second day of the visit.

The head of our state received the chairman of the Jokorgu Kenesh of the Kyrgyz Republic Chynybai Tursunbekov at the residence allocated for him.

We highly value the centuries-old friendship and cooperation between our people. Development of cooperation between Uzbekistan and Kyrgyzstan, based on mutual respect and trust, is one of the important directions of our foreign policy, said Shavkat Mirziyoyev.

Today, Uzbek-Kyrgyz relations are reaching a new level in all areas of cooperation. A striking example of this is the signing of the Agreement on Uzbek-Kyrgyz state border during the state visit of the President of our country Shavkat Mirziyoyev. Now the two countries’ parliaments are faced with the task of ratifying and strengthening legal foundations of this historic document.

A parliamentary group has been established under the Oliy Majlis of the Republic of Uzbekistan for further strengthening friendly relations between our countries.

The head of our state invited the chairman of the Jokorgu Kenesh of the Kyrgyz Republic to visit Uzbekistan for getting familiar with the reforms that are being implemented in our country, strengthening cooperation and exchanging experience.

In addition, the signed important documents have become a logical continuation of relations of the two states based on traditional friendship and harmony in trade, economic, cultural, humanitarian and other spheres.

Then the President of our country Shavkat Mirziyoyev received the Prime Minister of the Kyrgyz Republic Sapar Isakov and congratulated him on his appointment to this responsible state post.

I wish you success in this responsible post and hope that you will make every effort to effectively implement the agreements reached between our countries, said the head of our state.

Sapar Isakov noted that the state visit of Shavkat Mirziyoyev to Kyrgyzstan has opened a new stage in mutually beneficial cooperation of our states.

At the meeting, the sides expressed confidence that the agreements reached and concluded as the result of the visit will contribute to the comprehensive strengthening of historically friendly and good-neighborly relations between our people.